The last report on the miracles at Little No Horse / Louise Erdrich. 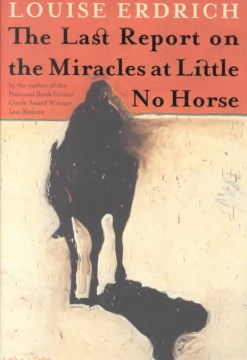 /*Starred Review*/ It's high time to acknowledge that Erdrich's ongoing sequence of novels about Native American life on an Ojibwe reservation in North Dakota over the last century stands at the pinnacle of recent American fiction. Her latest exploration of the interlocking lives of several generations of characters from her fictional reservation works beautifully as a reprise of all that has come before: the action, centered on the life of a priest who served the reservation for nearly a century, jumps back and forth in time, offering a chance for various figures from the principal families in Erdrich's world--Nanapush, Kashpaw, Pillager, Morrisey--to cross the stage once more, viewing life, as always, with passion, poetry, and a self-sustaining sense of the absurd. This time, though, all of that is glimpsed through a new and compelling filter: Father Damien, who is, in fact, Agnes De Witt, the common-law wife of a murdered German farmer, who through a typically absurd sequence of events, finds her mission in life by impersonating a dead priest. As Father Damien, in his (her) 90s and nearing death, attempts to explain to a younger priest why Sister Leopolda should not be made a saint, we experience the history of the reservation from the unique point of view of an outsider who gradually, under the tutelage of the wise and hysterically funny Nanapush, throws in her spiritual lot with the Ojibwe. (Erdrich, always a master of the set piece, outdoes herself here with the tall tale of Nanapush's encounter with a frightened moose, perhaps the most wonderfully comic sequence in the author's entire oeuvre.) This is Erdrich writing at the peak of her powers, embracing both the earthy sensuality and abiding spirituality of her characters and energizing the whole with a raucous humor that is at once self-deprecating and life-enhancing. ((Reviewed February 15, 2001)) Copyright 2001 Booklist Reviews

Already thrice excerpted in The New Yorker, this work features Father Damien, devoted servant of the Ojibwa people, whose past is catching up with him. FREDRIKSSON, Marianne. Copyright 2000 Cahners Business Information.

Readers of Erdrich's new work know right away that it concerns a mystery the elderly Father Damien Modeste, who has served on an Ojibwa reservation for decades, says as much in the impassioned missive to the Pope that opens the book. And the mystery is not that Father Damien Modeste is actually a woman in disguise, a startling secret that gets spilled in the next few pages. There is much more to come in this rich, sprawling tale (overwritten but beautifully overwritten) as it makes an anguished plunge into the past occasioned by the appearance of Father Jude Miller, sent to ascertain whether Sister Leopolda deserves sainthood. The answer to his quest lies buried in a tangled web of reservation history, and as it is slowly unwound, we encounter white abuse, Native suffering and survival, and religious and sexual ecstasy (sometimes conjoined), plus Pillagers, Morrisseys, Kapshaws, and other characters readers of Erdrich (The Antelope Wife) already know. The initial sense, then, is of treading old ground, but as the novel unfolds, it gathers strength like a giant thunderhead and strikes one right through the heart. The investigation of art as mainstay and revelation is particularly sharp, and one hopes Erdrich will pursue this line of thought in her next work. Highly recommended. [Previewed in Prepub Alert, LJ 12/00.] Barbara Hoffert, "Library Journal" Copyright 2001 Cahners Business Information.

Erdrich seems to be inhabiting her characters, so intense and viscerally rendered are her portrayals. Her prose shimmers: a piano being carried across the plains is "an ebony locust." This novel will be remembered for a cornucopia of set pieces, all bizarre and stunning: wounded and taken hostage by a bank robber and pinned to the running board of his Overland automobile, Agnes, "her leg a flare of blood," briefly touches hands with her astonished lover as the car crosses his path; old man Nanapush, impaled on fish hooks that pin him to a boat that's hitched to the antlers of a wounded moose, careens through the woods in delirious exhaustion. Writing with subtle compassion and magical imagination, Erdrich has done justice to the complexities of existence in general and Native American life in particular. First serial selections in the New Yorker have whetted appetites for this novel, and picks by BOMC and QPB, major ad/promo and an author tour will give it wide exposure. (Apr.) Copyright 2001 Cahners Business Information.

The breath of nightArditti, Michael