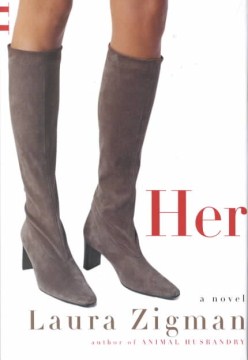 Zigman, a former publicist who used to work for Knopf, is now publishing her third novel with her former employer. Elise has left the magazine business and New York behind to go to grad school in Washington, D.C. She meets Donald on a shuttle plane, and the two hit it off, despite Elise's annoyance at the fact that Donald mentions his ex-fiancee, Adrienne. A year later, Elise and Donald are engaged, but Elise is still jealous of Adrienne. When Adrienne announces that she's moving to D.C., Elise is sure she's planning to steal Donald away. Adrienne arrives, and she's everything Elise feared: gorgeous, magnetic, and flirtatious. Despite her insecurities, Elise decides to put aside her doubts and befriend Adrienne. Is Adrienne really trying to steal Donald, or is it all in Elise's head? Elise is neurotic but sympathetic, and Zigman expertly pulls the reader into the story through Elise's eyes. Readers who liked Zigman's previous novels, Animal Husbandry (1998) and Dating Big Bird (2000), will enjoy this captivating tale of jealousies and misconceptions. See "Works in Progress" [BKL Mr 15 02] for more about Zigman's transition from publicist to author. ((Reviewed April 15, 2002)) Copyright 2002 Booklist Reviews

Zigman (Animal Husbandry) continues her mordant investigation of contemporary romance with this story of a couple whose impending nuptials are disrupted by the man's gorgeous ex-fiancée. Copyright 2001 Cahners Business Information.

This slim profile-cum-cautionary tale of an obsessed, driven woman brings Françoise Sagan's Bonjour, Tristesse to mind, though it's less downbeat. Popular author Zigman (e.g., Animal Husbandry) tells the story of Elise, whose relationship with fiancé Donald is put to the test when his aggressive, drop-dead-gorgeous ex-fiancée, Adrienne, decides to relocate to Washington, DC, and looks him up. Immature Donald's not much of a prize he's obsessive to the point of absurdity on the subject of his weight and prone to dropping his trousers when upset. The question for readers, then, is whether they want to read a story, however well written, about annoying, even mean-spirited people. Zigman dissects paranoia and single-Jewish-woman angst perfectly and no doubt will connect with a number of readers, but the tale's attempts at humor are forced and the ending contrived. The moral of this story is that smart women are often dim, and perhaps that's just not quite enough. Recommended for public libraries where there's a demand for women's fiction. [Previewed in Prepub Alert, LJ 2/15/02.] Jo Manning, Barry Univ., Miami Shores, FL Copyright 2002 Cahners Business Information.

Zigman's third novel, a wild tale of a woman's "transformation... from bride-to-be to madwoman" is for anyone who's ever felt prewedding jitters and the pangs of obsessive jealousy. Having left her job at a teen magazine in New York City to pursue a quieter life in Washington, D.C., Zigman's narrator, Elise, meets her perfect guy Donald, a reformed bond trader now teaching English at Sidwell Friends on the Delta shuttle. Or her almost perfect guy. Donald's one fault is that he was engaged to Adrienne, and her name crops up in just about every conversation. Though Donald and Elise swiftly fall in love and begin planning their wedding, Elise cannot help obsessing over the brilliant and "horrifyingly gorgeous" former fiancée. But like the paranoiac who is being followed, Elise may have good reason to be jealous. Only months before the wedding, Adrienne takes a job in Washington, D.C., and reinserts herself into Donald's life, fueling Elise's jealousy as well as a slapstick plot having to do with Donald's dog, Elise's wedding dress and liposuction. Zigman is better at caricature than characterization, and her emphatic, read-aloud style sometimes falls flat on the page. Yet some scenes when Donald meets Elise, for instance are fresh and smart and almost perfect, as are many of her one-liners. (May) Forecast: Zigman's Animal Husbandry was made into the movie Someone Like You (starring Ashley Judd), and Her, which smacks of My Best Friend's Wedding and other zany takes on upcoming nuptials, is begging to be sent to Hollywood, too. Zigman who's as zippy with the one-liners in conversation as she is in writing will plug her book on NPR and Today, and these appearances, plus certain attention in women's magazines, will win her new fans. Copyright 2002 Cahners Business Information.

Chose the wrong guy, gave him the wrong fingerHarbison, Beth

Josh and Hazel's guide to not datingLauren, Christina, (Joint pseudonym)