Jarhead : a Marine's chronicle of the Gulf War and other battles / Anthony Swofford. 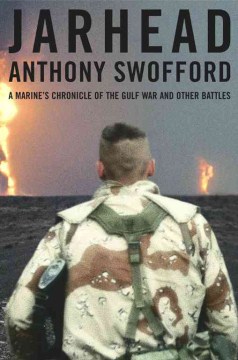 Swofford hated being a marine, but he was apparently a good and skilled soldier during his service. He was recruited from the ranks of grunts for a reconnaissance and sniping squad and was on the front line of the Gulf War's ground attack. In this memoir, Swofford's portrayal of the battlefield also contains flashbacks and flash-forwards of his personal life, which serve as platforms for his recurrent cynicism. Expressing it gives Swofford's prose an exaggerated style as he searches for variant descriptions for his anger over military decorations, girlfriends, civilians, and the purpose of the war he fought. Death lurks in Swofford's story, for he contemplated suicide, worried about being killed by enemy or friendly fire, and witnessed the deaths of Iraqi soldiers. Writing graphically and in the marines' defiantly vulgar argot, Swofford candidly exhibits his negative feelings--and his comradeship with buddies belly to the sand. ((Reviewed January 1 & 15, 2003)) Copyright 2003 Booklist Reviews

In his memoir on life as a U.S. Marine, Swofford starts out by admitting that what he describes "is neither true nor false, but what I know." This is in no sense a chronicle of the Gulf War but instead an interior monolog reflecting Swofford's inner journey from despised childhood to coming of age as an enlisted marine and finally coming somewhat to terms with the man he has become. For Swofford, warfare was the culmination of everything he had experienced, so that his existential narrative hangs on his pivotal nine-month tour of duty. The boredom, frustration, fear, physical exertion, and relentless training all contributed to his sense of self, but in the end he felt capable of backing away from the total absorption of combat to live in the real world. Unfortunately, reconnection with civilian life turned out to be no easier than living in the combat zone. Many libraries may be put off by the book's pervasive sex and profanity, but it is an eloquent depiction of the martial enthusiasm of young men. Recommended for comprehensive military collections.-Edwin B. Burgess, U.S. Army Combined Arms Research Lib., Fort Leavenworth, KS Copyright 2003 Cahners Business Information.

Most readers already know that war is hell. Former marine sniper Swofford found that the descent from decency to vulgar brutality began long before he reached the battlefield. Using cinematic flashbacks and flash-forwards, he tells of extraordinary violence and its damage to his soul. An important addition to the literature of war. (LJ 1/03) (c) Copyright 2013. Library Journals LLC, a wholly owned subsidiary of Media Source, Inc. No redistribution permitted.

A witty, profane, down-in-the-sand account of the war many only know from CNN, this former sniper's debut is a worthy addition to the battlefield memoir genre. There isn't a bit of heroic posturing as Swofford describes the sheer terror of being fired upon by Iraqi troops; the elite special forces warrior freely admits wetting himself once rockets start exploding around his unit's encampment. But the adrenaline of battle is fleeting, and Swofford shows how it's in the waiting that soldiers are really made. With blunt language and bittersweet humor, he vividly recounts the worrying, drinking, joking, lusting and just plain sitting around that his troop endured while wondering if they would ever put their deadly skills to use. As Operation Desert Shield becomes Desert Storm, one of Swofford's fellow snipers-the most macho of the bunch-solicits a hug from each man. "We are about to die in combat, so why not get one last hug, one last bit of physical contact," Swofford writes. "And through the hugs [he] helps make us human again." When they do finally fight, Swofford questions whether the men are as prepared as their commanders, the American public and the men themselves think they are. Swofford deftly uses flashbacks to chart his journey from a wide-eyed adolescent with a family military legacy to a hardened fighter who becomes consumed with doubt about his chosen role. As young soldiers might just find themselves deployed to the deserts of Iraq, this book offers them, as well as the casual reader, an unflinching portrayal of the loneliness and brutality of modern warfare and sophisticated analyses of-and visceral reactions to-its politics. (Mar. 4) Copyright 2002 Cahners Business Information.

Where men win glory: the odyssey of Pat TillmanKrakauer, Jon
The face of battleKeegan, John, 1934-

One bullet away: the making of a Marine officerFick, Nathaniel

The last true story I'll ever tell: an accidental soldier's account of the War in IraqCrawford, John