Rowing to latitude : journeys along the Arctic's edge / Jill Fredston. 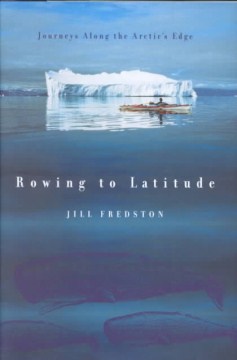 Among the leading avalanche specialists in North America, Fredston and her husband, Doug Fesler, use the proceeds of their work to pursue their first love, rowing in a motorless bliss along the Arctic coastlines. This book started innocently enough--as an annual newsletter to the couple's friends. Often, the narrative flits from subject to subject with the disjointedness of a newsletter--but, then, adventures in the wilderness happen disjointedly. The author, no matter the trouble--bears pawing at her tent at night, storms causing her small boat to spin around in circles--seems to suffer from terminal optimism. The reader waits in vain for fear or terror to show its head. Consequently, some of the natural drama of these travels is lightened. For lives that are solitary, poor, nasty, and brutish, there are good reasons to make these treks. But for those who can't manage to do so, volumes such as this one are the next best things to being there. ((Reviewed September 15, 2001)) Copyright 2001 Booklist Reviews

Growing up in a house on the waters of Long Island, Fredston started rowing at the age of ten, when she got her first rowboat. She and her husband, Doug Fesler, are avalanche experts and codirectors of the Alaska Mountain Safety Center, but during the summer months they explore the desolate reaches of the North, traveling under their own power in oceangoing skulls and kayaks. This is the story of their 20,000-mile water journeys through Alaska, Canada, Greenland, Spitsbergen, and Norway. The pair sees the world pass by in reverse as they row, backwards, down remote rivers and along barren, rugged shorelines. They travel along many of the same routes that Jonathan Waterman detailed in Arctic Crossing (LJ 4/15/01), but Fredston focuses more on the trip and only respectfully mentions contacts with the indigenous people and their culture. Like Waterman, the couple encounters fierce storms, ever-present mosquitoes, and abundant wildlife, but Fredston maintains that it is worth facing all this adversity in order to see and experience the natural beauty of the North. Enjoyable and well written, this first book is sure to be popular in public libraries. John Kenny, San Francisco P.L. Copyright 2001 Cahners Business Information.

In this lyrical look at rowing some of the world's most isolated and pristine coasts, Fredston focuses as much on her personal experience and her relationship with her husband, Doug Fesler, as she does on their actual journeys. The two avalanche experts, researchers and rescue trainers canoe the Arctic and sub-Arctic coastlines of Alaska, Canada, Greenland, Norway and Sweden for three months out of each year. They travel together but in separate canoes: an apt metaphor for their marriage. An avid rower since childhood, Fredston ultimately landed in Alaska, drawn by its possibility and wildness. There she met Fesler, the state's leading avalanche authority. They worked and rowed together, and eventually fell in love. Fredston ably describes both the big picture the coastline, encounters with polar bears, the high-stakes game of second-guessing storms and tides and the details of their travels. Her description of the physical act of rowing is rapturous, even sensual: "Sculling is the closest I'll ever come to being a ballerina, to creating visual music." Fredston seems less at ease relating her mother's battle with cancer, near the book's end. Still, the book soars. "Wilderness rowing is far more than sport to me; it has been a conduit to know and trust myself," Fredston explains. "It is my way of being, of thinking, of seeing. In the process, rowing has evolved from something I do to some way that I am. Figuratively and literally I have spent years rowing to latitude." A must-read for armchair travelers, as well as a close and loving look at an intimate relationship. (Sept.) Copyright 2001 Cahners Business Information.

The Emerald Mile: the epic story of the fastest ride in history though the heart of the Grand CanyonFedarko, Kevin

The cure for anything is salt water: how I threw my life overboard and found happiness at seaSouth, Mary
The curve of timeBlanchet, M. Wylie (Muriel Wylie), 1891-1961
Walking with ghosts in Papua New Guinea: crossing the Kokoda Trail in the last wild place on EarthAntonson, Rick, 1949-