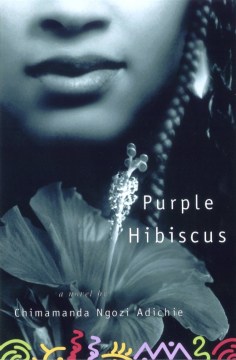 Fifteen-year-old Kambili and her older brother, Jaja, live a regal life in impoverished Nigeria. Their father is a very powerful man who owns many factories, lavishes money on his church and the local schools, and publishes a newspaper that is outspokenly critical of the country's repressive regime. But their marble palace often feels like a prison because the children are terrified of their father's temper; at home, he is a religious tyrant who exerts a fanatical control over their schedules and often beats their mother. They are overjoyed when their father unexpectedly allows them to visit his sister, Ifeoma, whose three children are quick to laugh, engage in vehement discussions, and pitch in to help the family cope with food and petrol shortages. Kambili, who is almost rendered mute in the presence of her boisterous cousins, slowly starts to open up. This impressive first novel is redolent in its depiction of the Nigerian countryside and generates a palpable narrative tension over what's to become of Kambili and Jaja's newfound sense of freedom. ((Reviewed September 15, 2003)) Copyright 2003 Booklist Reviews

Fifteen-year-old Kambili lives comfortably with her parents and older brother, Jaja, in Enugu, Nigeria. Respected and generous with his money, her fanatically religious father is nevertheless cruel when his wife and children do not live up to his lofty expectations. When Kambili and Jaja visit their widowed aunt Ifeoma in the impoverished countryside, they endure many privations but finally enjoy the pleasures of a warm and loving family. They are even able to spend time with their beloved grandfather, whom their father has denounced as a heathen. Having grown up in Nigeria, Adichie speaks tellingly of the country's political and military problems, which serve to exacerbate escalating tensions within Kambili's family. The stunning denouement underscores the power of family love. Written with great sensitivity, this debut shows why Adichie has already won several awards (e.g., the Caine Prize for African Writing). Recommended for all libraries.-Ellen R. Cohen, Rockville, MD Copyright 2003 Reed Business Information.

By turns luminous and horrific, this debut ensnares the reader from the first page and lingers in the memory long after its tragic end. First-person narrator Kambili Achike is a 15-year-old Nigerian girl growing up in sheltered privilege in a country ravaged by political strife and personal struggle. She and her brother, Jaja, and their quiet mother, who speaks "the way a bird eats, in small amounts," live this life of luxury because Kambili's father is a wealthy man who owns factories, publishes a politically outspoken newspaper and outwardly leads the moral, humble life of a faithful Catholic. The many grateful citizens who have received his blessings and material assistance call him omelora, "The One Who Does for the Community." Yet Kambili, Jaja and their mother see a side to their provider no one else does: he is also a religious fanatic who regularly and viciously beats his family for the mildest infractions of his interpretation of an exemplary Christian life. The children know better than to discuss their home life with anyone else; "there was so much that we never told." But when they are unexpectedly allowed to visit their liberated and loving Aunty Ifeoma, a widowed university professor raising three children, family secrets and tensions bubble dangerously to the surface, setting in motion a chain of events that allow Kambili to slowly blossom as she begins to question the authority of the precepts and adults she once held sacred. In a soft, searing voice, Adichie examines the complexities of family, faith and country through the haunted but hopeful eyes of a young girl on the cusp of womanhood. Lush, cadenced and often disconcerting, this is an accomplished first effort. Author tour. (Oct. 17) Copyright 2003 Reed Business Information.

Everything good will comeAtta, Sefi

My sister, the serial killerBraithwaite, Oyinkan