What was she thinking? : notes on a scandal / Zoë Heller. 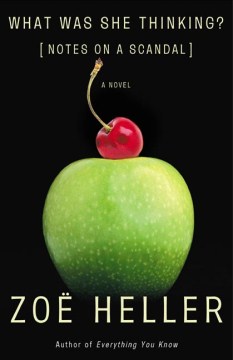 Heller's insightful, piercing second novel (her first was Everything You Know [2000]) is narrated by Barbara Covett, a lonely older woman who purports to tell the story of her friend's downfall. When Sheba Hart arrives to be the new art teacher at the school where Barbara teaches history, solitary Barbara is immediately taken with her. Though her initial attempt to befriend Sheba is thwarted when Sheba becomes friends with another teacher, eventually Sheba begins to converse with Barbara. Soon, she invites Barbara over to her house to have meals with her family. Barbara is shocked to learn that Sheba is being pursued by a 15-year-old student and scandalized to find that Sheba has given in to his romantic overtures. But for solitary Barbara, her friend's scandalous life^B is a window to a more exciting one, and vicariously she laps up the bits and pieces Sheba shares, imagining or surmising the rest. The novel builds to a stunning ending that ultimately reveals Barbara's true character as much as it shows the depths to which Sheba has fallen. Both a penetrating character study and a sharp examination of voyeurism, Heller's novel is utterly brilliant. ((Reviewed August 2003)) Copyright 2003 Booklist Reviews

A new York resident since 1993 who writes a weekly piece for the London Telegraph, Heller won the 2002 British Press Award for Columnist of the Year. Her new novel (after Everything You Know) concerns a retiring schoolteacher who decides to write a defense of new friend Sheba's scandalous affair with a student. Copyright 2003 Reed Business Information.

Spinster schoolteacher Barbara Covett lives a somewhat lonely life (although that's not how she would describe it). She disdains her fellow teachers at St. George's, and her closest companion is her cat, Portia. When the bohemianly attractive Sheba Hart arrives at school as the new art instructor, Barbara strikes up a friendship with her, thereby becoming the only person who knows that Sheba is having an affair with a young student. But somehow the news is leaked to the school administration, and Sheba becomes the focus of a media avid for scandal. Anxious to protect Sheba and to run interference with her husband and children, Barbara persuades Sheba to move in with her and begins secretly writing a defense of her friend's behavior-the book we're reading-which inadvertently reveals more about Barbara than Sheba. Heller's (Everything You Know) first-person narrator seems totally self-deluded. Or is she? Are Barbara's motives saintly or sinister? This deliciously subtle novel about obsession, love, and (possibly) friendship belongs on most public library fiction shelves. [Previewed in Prepub Alert, LJ 4/1/03.]-Nancy Pearl, Washington Ctr. for the Book, Seattle Copyright 2003 Reed Business Information.

Subtitled Notes on a Scandal, Heller's engrossing second novel (after Everything You Know) is actually the story of two inappropriate obsessions-one a consummated affair between a high school teacher and her student, the other a secret passion harbored by a dowdy spinster. Sheba Hart, a new 40ish art teacher at a London school for working-class kids, has been arrested for having a sexual relationship with a 15-year-old student, Steven Connolly. The papers are having a blast. Sheba is herself the object of fascination for her older colleague and defender, Barbara Covett, whose interest in Sheba is not overtly romantic but has an erotic-and at times malevolent-intensity. Barbara narrates the story of Sheba's affair while inadvertently revealing her own obsession and her pivotal role in the scandal. The novel is gripping from start to finish; Heller brings vivid, nuanced characterizations to the racy story. Sheba is upper-class, arty, carelessly beautiful in floaty layers of clothing, with a full life of her own: doting older husband, impossible adolescent daughter, a son with Down's Syndrome, real if underdeveloped talent as a potter. She never got a driver's license, she tells Barbara, because she is always given rides; people want to do things for her. Barbara's respectable maiden-lady exterior hides a bitter soul that feasts on others' real and imagined shortcomings: one colleague's carelessly shaved armpits, another's risible baseball jacket. Even characters on stage for a minute (a Camden barman who hams it up for Barbara) live and breathe. Author tour. (Aug.) Forecast: Some readers will pass this up as yet another take on the shopworn theme of student/teacher romance, but Heller's light touch will win over others and please reviewers. Copyright 2003 Reed Business Information.

The sense of an endingBarnes, Julian

All we ever wantedGiffin, Emily

Death of the black-haired girlStone, Robert, 1937-