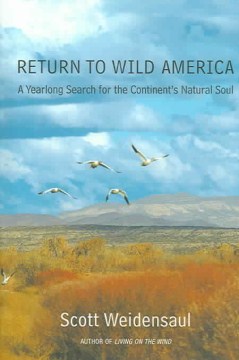 /*Starred Review*/ Accomplished writer-naturalist Weidensaul, author of Living on the Wind(1999), has long been inspired by Wild America (1955), a now-classic account of a cross-country journey undertaken by the "birding guru" Roger Tory Peterson and naturalist James Fisher. Curious about what has changed since their adventures 50 years ago, Weidensaul set out on his own extraordinary quest, and consequently his gorgeously detailed, involving, and provocative chronicle of the state of wetlands, deserts, mountains, forests, plains, and coral reefs moves across two grand landscapes--terrain described by Peterson and Fisher and land Weidensaul arduously traverses. As Weidensaul observes beetles in Appalachia, seabirds in Newfoundland, invasive species wreaking havoc in Florida, the symbiosis between salmon and trees in the Pacific Northwest, ocelots in Texas, condors in Arizona, and the alarming signs of global warming in Alaska, he explicates the unintentionally deleterious effect human activities are having on the biosphere. But Weidensaul also revels in the ingenuity and beauty, resiliency and resurgence of nature, and reports on impressive conservation success stories. One of the many traumatic lessons of Hurricane Katrina is that environmental concerns are real and that we must commit to protecting the biosphere and ourselves. ((Reviewed October 15, 2005)) Copyright 2005 Booklist Reviews.

In 1953, Houghton Mifflin published Roger Tory Peterson and James Fisher's classic Wild America:The Record of a 30,000 Mile Journey Around the Continent by a Distinguished Naturalist and His British Colleague . This reprise is by another distinguished naturalist, Pulitzer Prize finalist Weidensaul (The Ghost with Trembling Wings ), who retraced Peterson and Fisher's route 50 years later. Vividly chronicled here are the changes or lack of change in wild North American areas like the Maritime Provinces, Florida, northern Mexico, Texas, Arizona, California, and the Pacific Northwest, including Alaska. Weidensaul gives readers an in-depth account of the bad news since 1953, including the spread of destructive and invasive species, chemical pollution, global warming, species decline, and the unnecessary logging of some old-growth forests. He also celebrates the good news: enlightened environmental legislation, new parks and refuges, the comebacks of some threatened species, and the birth of the environmental movement. All in all, an engaging and most informative sequel; highly recommended.--Henry T. Armistead, Free Lib. of Philadelphia

In the midst of environmental-policy gloom and global-warming doom, Weidensaul's poetic account of his travels to several scattered wilderness oases of North America is an unexpected tonic. The naturalist and author (Living on the Wind ) certainly waxes caustic about the current administration's ecological evils; bemoans the impact of Earth's warming trend on northern ice packs and southern wetlands; decries the near (sometimes total) extinction of a multitude of fauna and flora; and laments the incursion of "invasive exotics"--foreign plants, insects, animals and fish that are crowding out native species. But in retracing the steps of American birding guru Roger Tory Peterson and British naturalist James Fisher's legendary 1953 trek--from Newfoundland's craggy coastline, down the East Coast, into Mexico and up the West Coast to Alaska--Weidensaul time and again celebrates pockets of species survival, optimistically hailing "the resiliency of wild America." His brief excerpts from and steady references to Wild America , the classic wilderness account penned by his predecessors, ought to renew deserved interest in the original book. But this engrossing state-of-nature memoir, making a vibrant case for preserving America's wild past for future Americans, promises to become a classic in its own right. 8 pages of illus., 6 maps not seen by PW . Agent, Peter Matson . (Nov.)

Where the water goes: life and death along the Colorado RiverOwen, David, 1955-

Salvaging the real Florida: lost and found in the state of dreamsBelleville, Bill, 1945-

The hour of land: a personal topography of America's national parksWilliams, Terry Tempest

Galapagos: the islands that changed the worldStewart, Paul D.

Travels in the Greater YellowstoneTurner, Jack, 1942-