A land gone lonesome : an inland voyage along the Yukon River / Dan O'Neill. 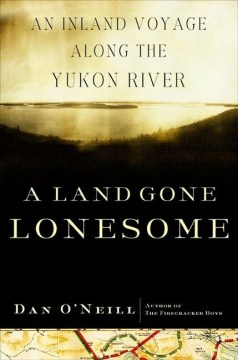 O'Neill, who lives in a log cabin in Fairbanks, Alaska, chronicles his journey along the Yukon River in a canoe and his forays into the wildness into which the river takes him. His exciting trip begins in Dawson, Yukon Territory, and ends in Circle City, Alaska. O'Neill gives readers a brief history of the land and then proceeds to describe the beauty of the woods, water, birds, bears, and bluffs. O'Neill is charmed by the characters he meets along the way, including Randy Brown, who lived in a six-by-nine-foot cabin before marrying a schoolteacher, and Charlie Kidd, who walked 120 miles in snowshoes over the Woodchopper Trail once a year rather than make the trip by boat or dog teams. Then there's Dick Cook, who "looked like a marooned pirate in Birkenstocks, a castaway scavenger of random goods." O'Neill's love of the land shines through on every page. ((Reviewed May 15, 2006)) Copyright 2006 Booklist Reviews.

Some interesting characters left their mark along the banks of the Yukon River. Alaskan O'Neill (The Last Giant of Beringia) canoes along this waterway from Dawson, Yukon Territory, to Circle City, AK. The stops along the way initiate tales of the gold rush, salmon, fur trapping, dog sledding, subsistence living, and other aspects of life unique to the Alaskan wilds. Each bend in the river tells a story through its inhabitants: there are the old miners with an unspoken code of living, the fur trappers who built trails through their isolated territories, and those who moved to Alaska in the 1970s to return to nature. As O'Neill describes the decaying cabins and disappearing people, he reveals that regulations and laws changed life for all those along the area of the river that became part of the Yukon-Charley Rivers National Preserve. Like John McPhee's Coming into the Country, to which O'Neill refers throughout, this is the human history of a place where few people have ever lived. Recommended for collections on Alaska.--Janet Clapp, Athens-Clarke Cty. Lib., GA

Outdoorsman O'Neill (The Last Giant of Beringia ) steers his canoe through the history and topography of the Yukon River, which runs through Canada and Alaska, letting its course carry his witty travelogue. Drawing from legend, interview and observation, he evokes the river's rustic majesty and the spartan dignity of its vestigial towns, briefly fed by the frenzied Gold Rush of the 1890s. His engaging account of the river's history punctuates its backwater charm, pulling readers into a realm of frigid wilderness and frontier stakeouts. He captures the hardiness of its scattered dwellers in vignettes of outmoded customs and bawdy tourist traditions, including the tale of someone chugging an amputated-toe cocktail in the Canadian town of Dawson. Exploring the conflict between nature and society, O'Neill writes of legendary holdouts (such as crusty Dick Cook, who he acknowledges was also a subject of John McPhee) who chafe at federal mandates that threaten their hardscrabble homesteads. O'Neill's meditations on the river branch into epic themes of self-reliance, heroism and humanity. Poetic renderings of creeks, camps and log cabin settlements bestow a refined gloss on rough terrain, reviving the moribund spirit of the "ghost river connecting ghost towns." (June)

Out there: in the wild in a wired ageKerasote, Ted
Dazed but not confused: tales of a wilderness wandererCallan, Kevin

Amazon woman: facing fears, chasing dreams, and a quest to kayak the world's largest river from source to seaGaechter, Darcy

My old man and the sea: a father and son sail around Cape HornHays, David, 1930-

Reading the river: a voyage down the YukonHildebrand, John
The last voyageurs: retracing La Salle's journey across America: sixteen teenagers on an adventure of a lifetimeBoissoneault, Lorraine
Tse-loh-ne: the people at the end of the rocks : journey down the Davie TrailBillington, Keith, 1940-

Homelands: kayaking the Inside PassageRicks, Byron