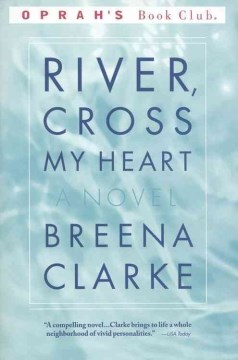 Ten-year-old Johnnie Mae Bynum is haunted by the memory of her sister Clara, who drowned in the Potomac River at a point where the neighborhood children had been routinely warned against swimming. Five years older, Johnnie Mae had always been charged with Clara's care, so Clara's death stirs up guilt and confusion. Had she pushed Clara into the water or was she only guilty of neglect? The drowning changes the dynamics within the Bynum family, still coping with the move from South Carolina to the Georgetown area at the insistence of the mother, the strong-willed Alice Bynum, who wants opportunities for her children that she perceives exist in the North of the 1920s. Hence Alice both admires and fears Johnnie Mae's defiant resistance to segregated swimming pools, which chafes her own sense of racial injustice and political expedience. Clarke's first novel beautifully ties together themes of family tensions after the death of a child, a young girl's coming-of-age, and racial animosities in a small community. ((Reviewed June 1 & 15, 1999)) Copyright 2000 Booklist Reviews

YA-Set in Georgetown, this poignant coming-of-age story begins with the drowning death of six-year-old Clara Bynum. Johnnie May, at 12, was supposed to be minding her the morning the children went down to the river, knowing they were not allowed to play near it, much less swim in it. The Bynums had come to Washington, DC, from North Carolina looking for a better life, and life for the colored in Georgetown in the 1920s was better: plenty of work and good schools for the children. But Johnnie May's independent spirit causes trouble from the beginning. She is always asking why-why couldn't she swim in the pool on Volta Place, right across from Aunt Ina's house? Why does she always have to mind her little sister and clean up after her? Johnnie May is a natural leader, and "knowing her place" is a struggle. The story, which follows the Bynum family and friends in Georgetown for about a year, ends in triumph as Johnnie May wins a swim meet held in the new pool built for black people. Much of the book describes Johnnie May's relationships with her mother, her relatives, and her friends, painting a revealing picture of a river, a family, and a community.-Molly Connally, Kings Park Library, Fairfax County, VA Copyright 1999 Cahners Business Information.

Debut writer and Washington, D.C., native, Clarke has written a novel as lyric and alternately beguiling and confounding as its title. It is the story of the drowning of a six-year-old child, and the tragedy's ramifications for her family and neighbors in the black area of Georgetown in 1925 D.C. Clarke's scene-building skills are the novel's strengths and occasionally its weaknesses, as each chapter is an intense set piece that sometimes provokes more questions than answers. The story is ultimately that of the effects of Clara Bynum's death on her 12-year-old sister, Johnnie Mae, who was babysitting Clara at the time she fell into the river. Johnnie Mae suffers guilt, fear and loss, endures dreams, imaginings and confusion as she sees visions of her sister everywhere: in a trauma-stung classmate who wears braids like Clara's, and the vapor from a boiling pot of green beans that resembles her sister's face. Against a felt, poignant and meticulously detailed panorama of the African-American (then called "colored") community of Georgetown, Johnnie Mae struggles to find her bearings, to cope with institutional and family expectations, and with puberty and race. Johnnie Mae ultimately derives strength from her element, the water, as she becomes a talented swimmer, but her parents Alice and Willie struggle with inextinguishable grief. From the first vivid description of the Potomac, liquid elements provide themes and narrative tension in this plangent coming-of-age story, granting the reader a necessary, if temporary, distancing from the blunt fact of a dead child. Indeed, Clarke's research about African-American Georgetown in the early 20th century revisits a time and place as intricate as any, but so remote from most memories that the historical details are fascinating footnotes to an era. While authorial asides are sometimes intrusive, this is a haunting story. Agent, Cynthia Cannell. (July) Copyright 1999 Publishers Weekly Reviews

Everything I never told youNg, Celeste

The care and feeding of ravenously hungry girlsGray, Anissa