The wild trees : a story of passion and daring / Richard Preston. 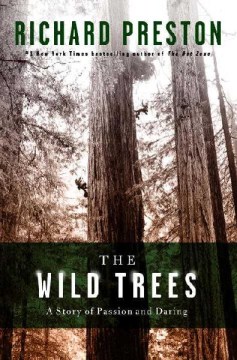 Preston's previous galvanizing best-sellers, including The Hot Zone (1994) and The Demon in the Freezer (2002), deal with catastrophic viruses and biological weapons. Here he turns to a more uplifting subject, the world's tallest trees. Writing with his signature clarity and drama, Preston profiles a trio of champions of the coast redwood, "the blue whales of the plant kingdom." Botanist Steve Sillett developed acrobatic techniques for reaching the crowns of redwoods more than 300 feet tall. There he discovered an unknown world, the teeming temperate forest canopy, which Preston describes as "coral reefs in the air." Maverick Michael Taylor has discovered redwood giants in nearly impenetrable wilderness areas. So important are his finds, the locations of these redwood groves, some 3,000 years old, are kept secret. Marie Antoine also answered the call of redwoods and married fellow scientist Sillett in an arboreal ceremony. As for Preston, not content to merely watch from the ground, he underwent tree-climbing training and has assisted Sillett and Antoine in their invaluable, gravity-defying work. Preston's hands-on perspective, suspenseful chronicling of the adventures of these vividly portrayed redwood experts, and glorious descriptions of the tall trees' splendor and ecological significance make for a transfixing read. ((Reviewed February 15, 2007)) Copyright 2007 Booklist Reviews.

Preston leaps from The Hot Zone into a grove of Sequoia sempervirens, or the California redwoods. With an 11-city tour. Copyright 2006 Reed Business Information.

Longtime New Yorker writer Preston has moved away from the topic of killer viruses, which he explored in The Hot Zone and The Demon in the Freezer , and on to the lofty subject of canopy biology. Unlike Margaret Lowman's Life in the Treetops and It's a Jungle Up There , which describe her own canopy research around the world, this book tells the story of people who have been drawn to study giant trees, interspersing facts about coastal redwoods and other giant trees with the life stories of canopy biologists whom Preston later meets and helps. At first, the narrative is somewhat disjointed, but eventually all the pieces fall into place, and Preston gives us a good understanding of why people are drawn to the study of tall trees and forest canopies. More than just a field guide, a scientific treatise, or a tribute to trees, this book covers history and people, reading more like a story than dry general science. Recommended for all public libraries. [See Prepub Alert, LJ 12/06.]—Margaret Henderson, Virginia Commonwealth Univ., Richmond

In this radical departure from Preston's bestsellers on catastrophic diseases (The Demon in the Freezer , etc.), he journeys into the perpendicular universe of the world's tallest trees. Mostly California redwoods, they are the colossal remnants of a lost world, some predating the fall of Rome. Suspended in their crowns, hundreds of feet above the forest floor, is a primeval kingdom of plants and animals that only a handful of people have ever seen. Now, thanks to Preston and a custom-made tree-climbing apparatus called a "spider rig," we get to see it, too.

According to Preston, it wasn't until the 1980s that humans made the first forays into the tops of "supertall" trees, in excess of 350 feet high. The people who pioneered their exploration are a rarefied bunchâ€"equal parts acrobat, adventurer and scientist. The book revolves around botanist Steve Sillett, an exceptional athlete with a tormented soul who found his calling while making a borderline suicidal "free" climb to the top of an enormous redwood in 1987, where he discovered a world of startling complexity and richness. More than 30 stories above the ground, he found himself surrounded by a latticework of fused branches hung with gardens of ferns and trees bearing no relation to their host. In this Tolkienesque realm of sky and wind, lichens abound while voles and salamanders live and breed without awareness of the earth below. At almost the exact moment that Sillett was having his epiphany in the redwood canopy, Michael Taylor, the unfocused son of a wealthy real estate developer, had a revelation in another redwood forest 200 miles to the south. Taylor, who had a paralyzing fear of heights, decided to go in search of the world's tallest tree. Their obsessive quests led these young men into a potent friendship and the discovery of some of the most extraordinary creatures that have ever lived.

Preston's tireless research, crystalline writing style and narrative gifts are well suited to the subject. Sillett, Taylor and their cohorts, who include a Canadian botanist named Marie Antoine, are fascinating, often deeply wounded characters. Their collective passion and intensity have illuminated one of the most vulnerable and poorly understood ecosystems on this continent. Preston adds a personal twist by mastering the arcane tree climber's art of "skywalking" and partnering with Sillett and Antoine on some of their most ambitious ascents. As impressive as this is, Preston's cameo appearance disrupts the flow of the main narrative and somewhat dilutes its considerable power.

John Vaillant is the author of The Golden Spruce: A True Story of Myth, Madness and Greed (Norton) and winner of the Canadian Governor General's Award for Non-Fiction (2005).

Never home alone: from microbes to millipedes, camel crickets, and honeybees, the natural history of where we liveDunn, Rob R.

The forest unseen: a year's watch in natureHaskell, David George

Lives of the trees: an uncommon historyWells, Diana, 1940-

The human age: the world shaped by usAckerman, Diane, 1948-

The embattled wilderness: the natural and human history of Robinson Forest and the fight for its futureReece, Erik

The tree: a natural history of what trees are, how they live, and why they matterTudge, Colin

Here is where I walk: episodes from a life in the forestRoberts, Leslie Carol

The man who planted trees: lost groves, the future of our forests, and a radical plan to save our planetRobbins, Jim