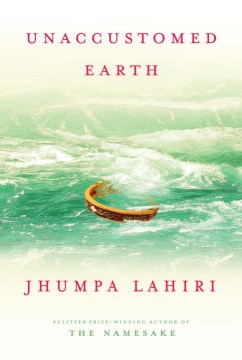 *Starred Review* Following her thoughtful first novel, The Namesake (2003), which has been made into a meditative film, Lahiri returns to the short story, the form that earned her the Pulitzer Prize for her debut, Interpreter of Maladies (1999). The tight arc of a story is perfect for Lahiri's keen sense of life's abrupt and painful changes, and her avid eye for telling details. This collection's five powerful stories and haunting triptych of tales about the fates of two Bengali families in America map the perplexing hidden forces that pull families asunder and undermine marriages. "Unaccustomed Earth," the title story, dramatizes the divide between immigrant parents and their American-raised children, and is the first of several scathing inquiries into the lack of deep-down understanding and trust in a marriage between a Bengali and non-Bengali. An inspired miniaturist, Lahiri creates a lexicon of loaded images. A hole burned in a dressy skirt suggests vulnerability and the need to accept imperfection. Van Eyck's famous painting, The Arnolfini Marriage, is a template for a tale contrasting marital expectations with the reality of familial relationships. A collapsed balloon is emblematic of failure. A lost bangle is shorthand for disaster. Lahiri's emotionally and culturally astute short stories (ideal for people with limited time for pleasure reading and a hunger for serious literature) are surprising, aesthetically marvelous, and shaped by a sure and provocative sense of inevitability. Copyright 2008 Booklist Reviews.

Eight stories of souls in upheaval, in settings that range from Seattle to Thailand. With an 11-city tour. Copyright 2007 Reed Business Information.

Four years after the release of her best-selling novel, The Namesake , the Pulitzer Prize-winning Lahiri returns with her highly anticipated second collection of short stories exploring the inevitable tension brought on by family life. The title story, for example, takes on a young mother nervously hosting her widowed father, who is visiting between trips he takes with a lover he has kept secret from his family. What could have easily been a melodramatic soap opera is instead a meticulously crafted piece that accurately depicts the intricacies of the father-daughter relationship. In a departure from her first book of short stories, Interpreter of Maladies , Lahiri divides this book into two parts, devoting the second half of the book to "Hema and Kaushik," three stories that together tell the story of a young man and woman who meet as children and, by chance, reunite years later halfway around the world. The author's ability to flesh out completely even minor characters in every story, and especially in this trio of stories, is what will keep readers invested in the work until its heartbreaking conclusion. Recommended for all public libraries. [See Prepub Alert, LJ 12/07.]—Sybil Kollappallil, Library Journal

The gulf that separates expatriate Bengali parents from their American-raised children—and that separates the children from India—remains Lahiri's subject for this follow-up to Interpreter of Maladies and The Namesake . In this set of eight stories, the results are again stunning. In the title story, Brooklyn-to-Seattle transplant Ruma frets about a presumed obligation to bring her widower father into her home, a stressful decision taken out of her hands by his unexpected independence. The alcoholism of Rahul is described by his elder sister, Sudha; her disappointment and bewilderment pack a particularly powerful punch. And in the loosely linked trio of stories closing the collection, the lives of Hema and Kaushik intersect over the years, first in 1974 when she is six and he is nine; then a few years later when, at 13, she swoons at the now-handsome 16-year-old teen's reappearance; and again in Italy, when she is a 37-year-old academic about to enter an arranged marriage, and he is a 40-year-old photojournalist. An inchoate grief for mothers lost at different stages of life enters many tales and, as the book progresses, takes on enormous resonance. Lahiri's stories of exile, identity, disappointment and maturation evince a spare and subtle mastery that has few contemporary equals. (Apr.)

For a little while: new and selected storiesBass, Rick, 1958-

Bad dreams and other storiesHadley, Tessa