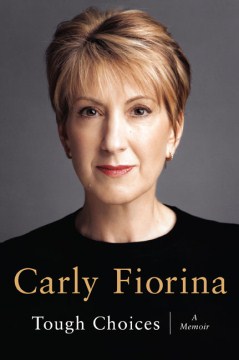 Fiorina may have had tough choices, but readers have an easy one: start at page 150 and read the Hewlett-Packard story first. As Carly Fiorina, the famously fired CEO of HP, vividly dissects the company's business, board and structural problems, her management views and talents are clearly visible. She also makes a compelling case for why she deserves some credit for the 2005-2006 turnaround. Less compelling are her claims that her introduction as CEO of HP was marred because "the one question we didn't prepare for was the question most frequently asked... about my gender." (Uh-huh.) When Fiorina dishes the board members, it's delish, especially when citing George "Jay" Keyworth's stated belief that "anyone who had leaked confidential Board conversations to the press shouldn't be allowed in the boardroom." (A wonderful irony since he initially refused to resign during the recent HP scandal when he was revealed as the source of confidential leaks.) Much of what Fiorina writes about the board will be in the news around this book's release, but her revelations are valuable beyond gossip because shareholders are demanding accountability from boards, it's fascinating to be inside a deeply dysfunctional boardroom. And it's just plain fun to see her settle some scores.

The start of her memoir, however, is a tedious telling of her rise through the corporate ranks at AT&T and Lucent. It's not clear exactly what the business challenges were the main thing she emphasizes about Lucent is her fondness for the "bold, red logo." These early chapters are filled with numbing passages: "In other words, our value-add would be to get everyone on the same page. Any organization is stronger when people are aligned to act together, instead of working at cross-purposes."

While I didn't come away with a sense of Carly Fiorina's personality much of what she writes about herself is unconvincing her book does shed light on the complexities of running a giant corporation. I also learned that I'd bought into media coverage of Carly Fiorina that was superficial at best and misleading at worst. I owe her an apology for that, and she owes her readers one for not hiring (or heeding) a good editor to make her message more riveting. (Oct. 9)

Robin Wolaner is the founder of Parenting magazine, former CEO of Sunset Publishing and author of Naked in the Boardroom: A CEO Bares Her Secrets So You Can Transform Your Career (Fireside, 2005).

Let my people go surfing: the education of a reluctant businessmanChouinard, Yvon, 1938-

Anything you want: 40 lessons for a new kind of entrepreneurSivers, Derek