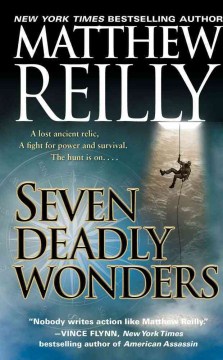 /*Starred Review*/ Some readers might look at Reilly's new novel as a calculated attempt to cash in on the success of The Da Vinci Code and its ilk. Someone with a less-cynical spirit will see it as a wildly fast-paced, hugely entertaining caper novel. The story is perfect for the big screen, assuming certain logistical and plausibility problems can be solved: a small international team of commandos, plus a scientist and a 10-year-old girl, dash around the world in a retrofitted Boeing 747. Their objective: to navigate through ancient traps set by an Egyptian architect and find the far-flung, long-lost Seven Wonders of the Ancient World and, with them, the seven pieces of the golden capstone of the Great Pyramid of Cheops. Their competitors: large, heavily armed contingents from the U.S. And Europe. At stake: the fate of the world. Many thriller writers are accused of producing first-draft screenplays that pretend to be novels. Reilly, on the other hand, writes movies in book form: his storytelling is almost purely visual, made up of scenes that leap off the page and project themselves on the screen in the reader's mind. Combine that with likably larger-than-life characters and an engaging, no-frills prose style, and you have a novel that grabs readers by the hand and pulls them along until they're out of breath. It is impossible (even for hard-core cynics) not to love this big, boisterous, action-filled adventure. ((Reviewed December 15, 2005)) Copyright 2005 Booklist Reviews.

Broken into seven pieces by Alexander the Great, the Golden Capstone once crowning the Great Pyramid of Giza protects the world from savage floods and heat occurring every 4500 years. Now that we're up for another blast, someone had better find those pieces. Copyright 2005 Reed Business Information.

The Golden Capstone that once stood atop the Great Pyramid of Giza saved the world from a dreadful solar event that once flooded and scorched Earth every 4500 years. But then Alexander the Great dismantled the capstone into seven pieces and hid them in the Seven Wonders of the Ancient World. In Reilly's latest (after Scarecrow ), another solar event will destroy the planet unless the pieces can be reassembled and put in their original setting; legend says that whoever succeeds in this task will gain absolute power for a thousand years. The race is on as the United States, an Islamic terrorist group, and a coalition of smaller nations that believes no individual country should control this power seek to be the first to recover the capstone. Ancient history, heart-stopping booby traps, and wild adventure make this a perfect book to jump-start your vacation beach reading. For all popular fiction collections. [See Prepub Alert, LJ 9/15/05; see Q&A with Reilly on p. 100.--Ed.]-- Jeff Ayers, Seattle P.L.

Full-stop "Screams. Splashing. Crunching. Blood" punctuate and come to epitomize Reilly's (Area 7 ; Ice Station ) latest video game-style thriller about a race to find the seven pieces of the Golden Capstone that once sat atop the Great Pyramid at Giza. Two millennia ago, Alexander the Great broke the Capstone into seven pieces and hid them in the seven ancient wonders of the world. According to legend, whoever finds and replaces them during a rare solar event called "Tartarus Rotation" (predicted for March 20, 2006) could secure a thousand-year reign of absolute power. The race is on, and among the contenders are the United States, a coalition of European nations (and the Vatican), an Islamic terrorist group, and a team of smaller nations (including Canada, Ireland and New Zealand) led by the novel's hero, Australian Jack West Jr., a next-generation Indiana Jones. The Europeans, goaded by evil Jesuit Francisco del Piero, and the U.S., headed by Jack's nemesis Col. Marshall Judah, want the Capstone for their own aggrandizement, while Jack's noble team believes it's too potent to belong to any one superpower. The "greatest treasure hunt in history"--a nonstop roller-coaster ride that lurches around the globe--might make a summer blockbuster--if American audiences will swallow their compatriots as the baddies. (Jan.)