The girl who fell from the sky : a novel / by Heidi W. Durrow. 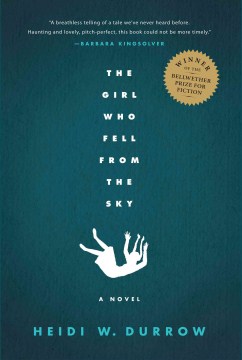 *Starred Review* When we are in pain or danger, we hold our breath and move with caution, which is how Durrow's measured and sorrowful debut novel unfolds. Rachel has yet to get the hang of the American hierarchy of skin color when she arrives in Portland, Oregon, to live with her father's mother and sister. Although considered black like her father, she is "light-skinned-ed" and has blue eyes, thanks to her Danish mother, whose shock and despair over the racism confronting her children after they moved from Europe to Chicago contributed to a mysterious tragedy only Rachel survived. Smart, disciplined, and self-possessed, Rachel endures her confounding new life, coming into her own as she comes of age. Meanwhile Jamie, the neglected son of a prostitute and the only witness to the Chicago catastrophe, has an even rougher time. Durrow fits a striking cast of characters and an almost overwhelming sequence of traumas into this compact and insightful family saga of the toxicity of racism and the forging of the self. As the child of an African American father and a Danish mother, Durrow brings piercing authenticity to this provocative tale, winner of the Bellwether Prize for Fiction. Copyright 2010 Booklist Reviews.

Durrow's first novel, inspired by a real event, won the 2008 Bellwether Prize for best fiction manuscript addressing issues of social justice. The young protagonist, Rachel, is the only survivor after her mother apparently threw her and her two siblings from a roof and then jumped to her own death. Like a good mystery, this book builds to the startling revelation of what really happened and why a loving mother would kill her children. But there's much more, and if the novel has a weakness, it's that it oozes conflict. Rachel, who is biracial, is abandoned by her father; a boy who witnesses the rooftop incident has his own difficulties, including a neglectful mother who's also a prostitute. But one can't help but be drawn in by these characters and by the novel's exploration of race and identity. VERDICT With similar themes to Zadie Smith's White Teeth and a tone of desolation and dislocation like Graham Swift's Waterland and Jean Rhys's Wide Sargasso Sea, this is also recommended for readers intrigued by the psychology behind shocking headlines.—Evelyn Beck, Piedmont Technical Coll., Greenwood, SC

Durrow's debut draws from her own upbringing as the brown-skinned, blue-eyed daughter of a Danish woman and a black G.I. to create Rachel Morse, a young girl with an identical heritage growing up in the early 1980s. After a devastating family tragedy in Chicago with Rachel the only survivor, she goes to live with the paternal grandmother she's never met, in a decidedly black neighborhood in Portland, Ore. Suddenly, at 11, Rachel is in a world that demands her to be either white or black. As she struggles with her grief and the haunting, yet-to-be-revealed truth of the tragedy, her appearance and intelligence place her under constant scrutiny. Laronne, Rachel's deceased mother's employer, and Brick, a young boy who witnessed the tragedy and because of his personal misfortunes is drawn into Rachel's world, help piece together the puzzle of Rachel's family. Taut prose, a controversial conclusion and the thoughtful reflection on racism and racial identity resonate without treading into political or even overtly specific agenda waters, as the story succeeds as both a modern coming-of-age and relevant social commentary. (Feb.)

Claire of the sea lightDanticat, Edwidge, 1969-