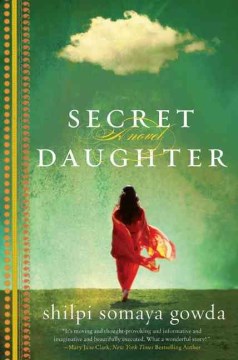 In her engaging debut, Gowda weaves together two compelling stories. In India in 1984, destitute Kavita secretly carries her newborn daughter to an orphanage, knowing her husband, Jasu, would do away with the baby just as he had with their firstborn daughter. In their social stratum, girls are considered worthless because they can't perform physical labor, and their dowries are exorbitant. That same year in San Francisco, two doctors, Somer and Krishnan, she from San Diego, he from Bombay, suffer their second miscarriage and consider adoption. They adopt Asha, a 10-month-old Indian girl from a Bombay orphanage. Yes, it's Kavita's daughter. In alternating chapters, Gowda traces Asha's life in America—her struggle being a minority, despite living a charmed life, and Kavita and Jasu's hardships, including several years spent in Dharavi, Bombay's (now Mumbai's) infamous slum, and the realization that their son has turned to drugs. Gowda writes with compassion and uncanny perception from the points of view of Kavita, Somer, and Asha, while portraying the vibrant traditions, sights, and sounds of modern India. Copyright 2010 Booklist Reviews.

Responding to poverty and a cultural preference for boys, an Indian mother hides her newborn daughter in an orphanage. The girl is adopted by an Indian-born doctor and his American wife, who live in California. Parallel stories are told of young Asha's life in America, where she is distanced from her native culture, and the growing rift between her adoptive parents, along with the fate of her birth parents and their son, who leave their small village for Mumbai and gradually rise out of poverty. After a slow start and some trite dialog, the book becomes more engrossing, as Asha takes a journalism fellowship in Mumbai and seeks a greater connection to her roots. First novelist Gowda offers especially vivid descriptions of the contrasts and contradictions of modern India. VERDICT Rife with themes that lend themselves to discussion, such as cultural identity, adoption, and women's roles, this will appeal to the book club crowd.—Christine DeZelar-Tiedman, Univ. of Minnesota Libs., Minneapolis

In rural India, where only sons matter, a young woman saves her daughter's life by placing her in an orphanage. The publisher is plumping for this debut, and what I've read is immensely touching. With a 50,000-copy first printing; reading group guide. Copyright 2009 Reed Business Information.

Gowda's debut novel opens in a small Indian village with a young woman giving birth to a baby girl. The father intends to kill the baby (the fate of her sister born before her) but the mother, Kavita, has her spirited away to a Mumbai orphanage. Meanwhile, in San Francisco, Somer, a doctor who can't bear children, is persuaded by her Indian husband, Krishnan, to adopt a child from India. Somer reluctantly agrees and they go to India where they coincidentally adopt Kavita's daughter, Asha. Somer is overwhelmed by the unfamiliar country and concerned that the child will only bond with her husband because "Asha and Krishnan will look alike, they will have their ancestry in common." Kavita, still mourning her baby girl, gives birth to a son. Asha grows up in California, feeling isolated from her heritage until at college she finds a way to visit her birth country. Gowda's subject matter is compelling, but the shifting points of view weaken the story. (Mar.)

A house for happy mothersMalladi, Amulya

Before we visit the goddessDivakaruni, Chitra Banerjee, 1956-

The ministry of utmost happinessRoy, Arundhati

Sister of my heartDivakaruni, Chitra Banerjee, 1956-