A long walk to water : a novel / by Linda Sue Park. 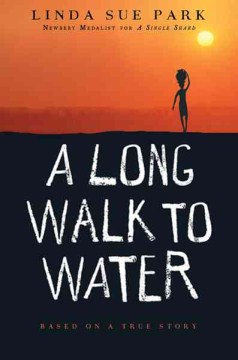 "*Starred Review* After 11-year-old Salva's school in Sudan is attacked by brutal rebel soldiers in 1985, he describes several terrifying years on the run in visceral detail: "The rain, the mad current, the bullets, the crocodiles, the welter of arms and legs, the screams, the blood." Finally, he makes it to refugee camps in Ethiopia and then Kenya, where he is one of 3,000 young men chosen to go to America. After he is adopted by a family in Rochester, New York, he is reunited with the Sudanese family that he left behind. There have been several books about the lost boys of Sudan for adults, teens, and even for elementary-school readers. But Newbery Award–winning Park's spare, immediate account, based on a true story, adds a stirring contemporary dimension. In chapters that alternate with Salva's story, Nya, a young Sudanese girl in 2008, talks about daily life, in which she walks eight hours to fetch water for her family. Then, a miracle happens: Salva returns home to help his people and builds a well, making fresh water available for the community and freeing Nya to go to school. The switching viewpoints may initially disorient some, but young readers will be stunned by the triumphant climax of the former refugee who makes a difference with the necessities that we all take for granted. Teachers may want to point out the allusion to Nelson Mandela's A Long Walk to Freedom (1995) echoed in this moving book's title." Copyright 2010 Booklist Reviews.

Park presents a novelization of how Salva Dut, one of the Lost Boys of Sudan, escaped his war-ravaged country and returned years later to found a company called Water for Sudan, Inc. A tandem narrative follows another Sudanese eleven-year-old, Nya, in 2008, as she trudges to and from a murky pond to collect water for her family. Park's spare text is riveting. Copyright 2011 Horn Book Guide Reviews.

The long walk is actually two -- two journeys that converge in Park's spare text, a novelization of how her friend Salva Dut, one of the Lost Boys of Sudan, escaped his war-ravaged country and returned years later to help revitalize it by founding a company called Water for Sudan, Inc. In 1985, gunfire outside eleven-year-old Salva's schoolhouse drives him and his classmates from their village. Not knowing if his family is dead or alive, he eventually joins a refugee group heading east to Ethiopia. A tandem narrative follows another Sudanese eleven-year-old, Nya, in 2008, as she spends her days trudging to and from a murky pond to collect water for her family. After Salva reaches the Ethiopian refugee camp, the text feels rushed, skipping over his years at multiple camps ('Salva was almost seventeen years old now'; 'Salva was now twenty-two years old') and, finally, in the United States. But the first half of the book offers a riveting account of his trek through bush and desert, facing starvation, finding his beloved uncle and losing him again to murderous thieves. Nya's story is also moving, as it illustrates the hardships of inaccessibility to clean drinking water and the wonder of receiving a village well -- drilled by Salva's company. Nya is amazed to discover that what her community needed most had been right there, beneath their feet, all along. CHRISTINE M. HEPPERMANN Copyright 2011 Horn Book Magazine Reviews.

Newbery Medalist Park's (The Single Shard) spare, hard-hitting novel delivers a memorable portrait of two children in Sudan--one an 11-year-old Lost Boy, Salva, who fled in 1985 and later immigrated to the United States, and 11-year-old Nya, who collects water for her village in 2008. Park employs well-chosen details and a highly atmospheric setting to underscore both children's struggles to survive. Salva's journey is tragic and harrowing, as he's driven by attacking soldiers and braves hunger, shifting alliances among refugees, and the losses of a friend to a lion attack and his uncle to violent marauders. "The days became a never-ending walk," he reflects. Salva's narrative spans 23 years and highlights myriad hardships but not without hope, as he withstands the deprivations of refugee camps, leads 1,200 boys to Kenya, and eventually gains sanctuary in Rochester, N.Y., where he still lives (he also contributes an afterword). Briefer entries about Nya preface chapters about Salva, illustrating the daily realities and sacrifices of modern-day life in Sudan. The eventual connection of Salva and Nya's stories offers the promise of redemption and healing. Ages 10–up. (Nov.)

A land of permanent goodbyesAbawi, Atia

Now is the time for runningWilliams, Michael, 1962-