The wake of forgiveness / Bruce Machart. 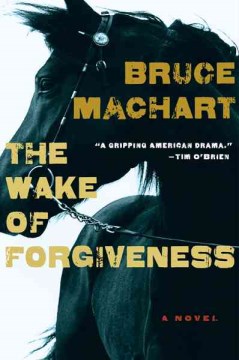 One dark night in 1895 Texas, Karel Skala must compete against the daughter of a powerful Spanish rancher in a horse race that will determine his family's fate. This highly touted debut, which at first glance seems uncompromising in language and moral suasion, should serve readers interested in historicals and the American Southwest as well as those who like works that ask the big questions. Jump on this; multicity tour. Copyright 2010 Reed Business Information.

Machart's riveting family narrative spans the decades between 1895 and 1924. Vaclav Skala, a hardworking immigrant farmer and the largest landowner in the prime farmland of Lavaca County, TX, did not come by his acreage honestly. Furthermore, he is a cruel, strict father, even harnessing his boys to the plow and leaving them with permanent neck injuries. Tragically, Vaclav's wife, Klara, dies giving birth to their fourth son, Karel, who grows up knowing that his father despises him for her death. The brothers inadvertently ruin a precious photo of their mother taken from their father's bedroom, and he inflicts further cruelty on them. After a questionable horse race when he is 15, Karel becomes estranged from his brothers-a rift that lasts years, even after their father's death. It takes another tragedy before Karel makes peace with his family. VERDICT This intense, fast-paced debut novel is hard to put down. Machart's hard-hitting style is sure to capture fans of Cormac McCarthy and Jim Harrison. We can only hope for more exceptional fiction from this very talented writer. Enthusiastically recommended. [See Prepub Alert, LJ 5/15/10.]-Donna Bettencourt, Mesa Cty. P.L., Grand Junction, CO Copyright 2010 Reed Business Information.

Machart's bleak, accomplished debut opens in 1895 as a landowning Texas family faces both sides of life's spectrum: the birth of a fourth son and the death of the boy's mother during childbirth. This event resonates throughout the lives of Vaclav Skala, who lost "the only woman he'd ever been fond of," and his four sons who, 15 years later, find their youngest sibling, Karel, to be a preternaturally talented equestrian. While Vaclav's wagers on his son's races increase, so does Karel's confidence, especially when facing off against the talk of the town: Guillermo Villaseñor, a powerful, moneyed, patronizing patriarch with three beautiful daughters. Yet Karel remains haunted by the memory of his mother, often feeling "the flat cool of her absence," and a prideful father who keeps him at arm's length. The consequences of a race that has his father's land hanging in the balance play out some 14 years later when, in 1924, Karel is married with children, yet still finds himself straying and facing inter-familial discord. Machart's moving story unfolds lyrically and sensually, with little fanfare, as his thoughtful prose propels a character-driven story about family, morality, and redemption. (Oct.)

The plague of dovesErdrich, Louise