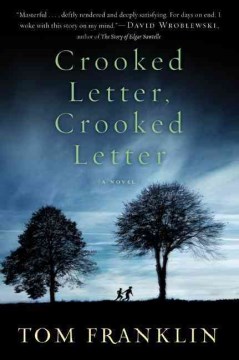 "*Starred Review* Rural Mississippi in the 1970s was rife with racial tension, but skin color didn't matter to boyhood companions Silas Jones and Larry Ott. Silas, the son of a poor, single black mother, and Larry, the child of white lower-middle-class parents, were both outsiders, Silas because of his color, Larry because he was quiet and a little odd, his nose always buried in horror novels. The young men's bond strengthened over time, until the night a pretty local girl went on a date with Larry to the drive-in movies and was never heard from again. No body was found and Larry never confessed, but that didn't keep the townspeople from suspecting him. Estranged from his friend, Silas heads off to college in Oxford, Mississippi, and more than 20 years later, returns to take a job as town constable. He sees no reason to contact Larry, who's settled into a lonely existence as a mechanic, unable to escape the relentless whispers and dirty looks. The disappearance of another girl brings the two former friends back together, forcing them to come to terms with buried secrets and dark truths. Edgar Award winner Franklin (Hell at the Breech, 2003) renders luminous prose and a cast of compelling characters in this moody, masterful entry." Copyright 2010 Booklist Reviews.

In 1970s Mississippi, bookish white boy Larry Ott befriends poor black Silas Jones, who has moved to the area from Chicago. During high school, they drift apart, as Silas excels at baseball and Larry is a nerdy outsider. One night, Larry has a date with a girl who is much too popular and good-looking for him. The girl vanishes mysteriously, and Larry is blamed, although no evidence of foul play ever turns up. Years later, when another local girl goes missing, all eyes focus on Larry, including local law enforcement, of which Silas is now a member. Larry is then discovered almost dead of a gunshot wound, and the investigation into all these crimes begins to heat up, producing buried bodies that would seem to incriminate Larry. But Silas remains loyal to his former friend and begins to unravel a twisted tale of murder that will reveal things he never knew about himself and Larry. Verdict A ripping good mystery, this novel also has depth and a subtle literary side, as the local area comes to life through the writer's cinematic descriptive phrases and a large and colorful cast of supporting characters. Highly recommended.-Jim Coan, SUNY Coll. at Oneonta Copyright 2010 Reed Business Information.

Franklin's evocative, moody novel is set in rural Mississippi, a red state as alien a place to me as the lunar surface. So while the landscape is unfamiliar (kudzu, armadillos) and the language is, uhh, homey (e.g., the N word and "ax" instead of "ask"), the familiar bits of a mystery are all present: a slowly unraveling plot, a less-than-motivated investigator, a police department that wants the whole thing to go away. It starts off-BLANG!-with the shooting of a loner/weirdo/bad guy. The hero who slowly figures out the particulars of the crime is Silas, a constable known more for his past baseball career than his competence. Franklin laces the book with descriptive appeal, as when Silas "eased up the steps, soft as moss, the porch like a cave, vegetation on all sides and bees boiling out of the white blooms... . Gently, he moved coils of ivy aside and peered through the snakehead kudzu leaves to where the front door was secured with a rusty padlock." The mix of unusual with common makes for a nice read. Sound good? (See also LJ's review in the July issue, posting 7/15/10.)-Douglas Lord, "Books for Dudes," BookSmack! 7/1/10 Copyright 2010 Reed Business Information.

Franklin's third novel (after Smonk) is a meandering tale of an unlikely friendship marred by crime and racial strain in smalltown Mississippi. Silas Jones and Larry Ott have known each other since their late 1970s childhood when Silas lived with his mother in a cabin on land owned by Larry's father. At school they could barely acknowledge one another, Silas being black and Larry white, but they secretly formed a bond hunting, fishing, and just being boys in the woods. When a girl goes missing after going on a date with Larry, he is permanently marked as dangerous despite the lack of evidence linking him to her disappearance, and the two boys go their separate ways. Twenty-five years later, Silas is the local constable, and when another girl disappears, Larry, an auto mechanic with few customers and fewer friends, is once again a person of interest. The Southern atmosphere is rich, but while this novel has the makings of an engaging crime drama, the languid shifting from present to past, the tedious tangential yarns, and the heavy-handed reveal at the end generate far more fizz than pop. (Oct.)