What the night knows : a novel / Dean Koontz. 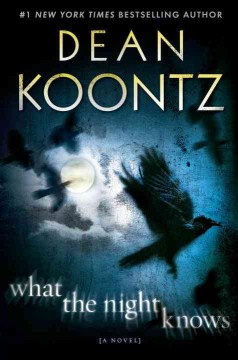 *Starred Review* John Calvino horns in on two fellow homicide detectives' case because it uncannily resembles the slaughter of his family two decades ago, which he, out on a surreptitious heavy date, came home to in the middle of the night, too late to do more than kill the killer. He has kept that night's details secret, so he's knocked for a loop when the present-day perp repeats verbatim one of the last things the Calvinos' murderer said. He becomes convinced that the murderer's spirit, leagued with a demon, has returned to execute a similar series of family-slaughters whose last victims will again be the Calvinos—his own brood. The evil spirit will follow the same schedule as 20 years ago, using persons its demon partner helps it possess as its baleful tools. Events start bearing John out, but there's a wrinkle in the murderer's plans. Koontz worked out a family-at-risk scenario in last year's Relentless;but whereas that book was breakneck-paced, science-fictional, riddled with screwball humor, and concerned about cultural politics, this novel is deliberate, highly supernatural, somber throughout, and motivated by religious dread—one of Koontz's weightiest performances. High-Demand Backstory: Koontz is Koontz; every library will need his newest. Copyright 2010 Booklist Reviews.

A young policeman finds a wise and stately Belgian Shepherd tugging at his sleeve and heads cross-country to make an important discovery. More dogs from Koontz! Never mind if a few of his ailurophilic fans twitch; the canine-centered The Darkest Evening of the Year is the publisher's top Koontz seller to date. Copyright 2010 Reed Business Information.

Billed as one of the scarier ghost stories you'll ever read, Koontz's latest features your average family trapped in their home by a back-from-the-dead type who's evidently mean as hell. Heavy promotion, including a special-effects jacket to draw readers in; Koontz is -really busy this season. Copyright 2010 Reed Business Information.

The author's first book, Star Quest, an sf paperback, was published in 1969. Since then, Koontz has written scores of titles in a wide range of genres from children's books to graphic novels. Yet, from his always-popular body of work there sometimes emerges one of particular merit, one likely to add even more readers to his fan base. This spooky ghost story is such a book. It succeeds as an outstanding work of horror because of several elements: the appeal of the main character, homicide detective John Calvino, whose family was murdered by a serial killer when he was 14; the unstoppable evil of the killer, Alton Turner Blackwood, whose spirit returns from death to embody others so that he can force them to do his bidding; and Koontz's adherence (as outlined in his 1972 Writing Popular Fiction) to his own creed for writing suspense in which The Chase, The Race Against Time, and The Anticipation of a Violent Event are of equal importance. VERDICT Essential for Koontz's myriad fans as well as followers of horror in general. [See Prepub Alert, LJ 8/10.]—Nancy McNicol, Hamden P.L., CT

In this less than suspenseful supernatural thriller from Koontz (Breathless), 14-year-old Billy Lucas's inexplicable slaughter of his entire family awakens the fears of homicide detective John Calvino, who as a child was the sole survivor of a similar family massacre. Though Calvino slayed the fiend who did the deed, he has always worried that the killings were demonic in nature and that the evil spirit responsible would return and harm his wife and three children. Sure enough, after Calvino visits the psychiatric ward where Lucas is held, something starts to haunt every member of his close-knit clan, though improbably and conveniently they all fail to share this disturbing development with each other. The detective believes he has a deadline to thwart the force bent on repeating the earlier murders. The terror level never reaches that of similarly themed works such as the movie Fallen. Clunky prose (e.g., Andy Tane, a cop, "is figuratively and literally a horse") doesn't help. (Jan.)

Deeper than the deadHoag, Tami