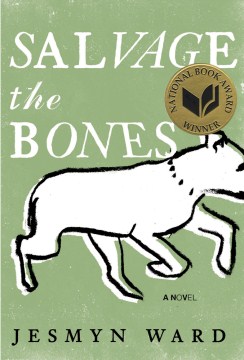 "Esch, 14 and secretly pregnant, is frantic knowing she hasn't the money for either an abortion or for the baby-to-be. Meanwhile, after Mama's death, Daddy has taken to drink, but whenever he's sober—and sometimes even when he's not—he is struggling to prepare their rural Mississippi property for the ominous advent of Hurricane Katrina. Meanwhile Brother Skeetah's pit bull has had puppies, which the boy plans to raise and sell. Soaringly tall brother Randall hopes for a basketball scholarship, and Junior, the youngest, simply drives everyone crazy. Here is an impoverished African American family that, if it didn't have bad luck, would have no luck at all. And yet the family endures despite privation, even despite the hurricane. Author Ward has an unfortunate tendency to overwrite, and this coming-of-age story tends at times to get lost in its style. In addition, Ward's surprising equation of Esch with the mythological Medea is less than completely successful. However, these problems are redeemed by the empathetic family she has created." Copyright 2011 Booklist Reviews.

As Ward's novel opens, a pregnant 14-year-old in Bois Sauvage, MS, watches the family's pit bull give birth while recalling her mother's childbed death and her own early sexual experiences. That charged, vivid overlapping continues throughout (on a quick look), as Ward deploys language at once lyric and punch-sharp to portray the struggle, despair, and tenderness of one poor African American family—day by day for 12 days, up until Katrina storms forth and takes away everything. Stegner fellow Ward's first novel, Where the Line Bleeds, won several prizes, including the American Library Association Black Caucus Honor Award. This looks both beautiful and heartbreaking and would be excellent for book clubs.

It's summer 2005 in Bois Sauvage, MS. Even as she watches her brother Skeetah's beloved pit bull, China, give birth, 15-year-old Esch realizes that she herself is pregnant. Like China in the dog ring, Esch's family is fighting daily just to survive, with her father mostly lost to drink after his wife died giving birth to Junior, and other brother Randall hoping he can win a place at basketball camp and eventually leave their thankless existence in the dust. Now a hurricane is coming, which means boarding up windows as Daddy schemes to make money helping with the inevitable cleanup. But this hurricane is Katrina, and more than cleanup will be needed when it's over. Working through the 12 days building up to and encompassing the hurricane's arrival, Ward (Where the Line Bleeds) uses fearless, toughly lyrical language to convey this family's close-knit tenderness, the sheer bloody-minded difficulty of rural African American life, and what it's like when those hurricane winds sledge-hammer you and the water rises faster than you can stand up. It's an eye-opening heartbreaker that ends in hope. VERDICT Highly recommended; you owe it to yourself to read this book. [See Prepub Alert, 3/21/11.]—Barbara Hoffert, Library Journal

Ward's poetic second novel (after Where the Line Bleeds) covers the 12 days leading up to Hurricane Katrina via the rich, mournful voice of Esch Batiste, a pregnant 14-year-old black girl living with her three brothers and father in dire poverty on the edge of Bois Sauvage, Miss. Stricken with morning sickness and dogged by hunger, Esch helps her drunken father prepare their home for the gathering storm. She also looks after seven-year-old Junior while her oldest brother, Randall, trains to win a scholarship to basketball camp, and middle son Skeet devotes himself to delivering and raising his fighting bitch China's pit bull puppies. All the while, Esch ponders whether she will have the baby and yearns for its father to love her "once he learns secret." Esch traces in the minutiae of every moment of every scene of her life the thin lines between passion and violence, love and hate, life and death, and though her voice threatens to overpower the story, it does a far greater service to the book by giving its cast of small lives a huge resonance. (Sept.)