Before Versailles : a novel of Louis XIV / Karleen Koen. 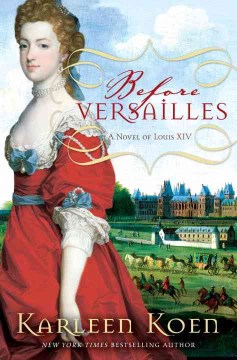 Despite his tender age (22) and relative lack of solo governing experience, young Louis XIV of France makes himself a force to be reckoned with during the first year of his reign after the death of his savvy chief minister, Cardinal Mazarin. Navigating his way through court politics and intrigue, he develops the style and verve that will define his lengthy sovereignty. As the young Sun King develops his domestic, diplomatic, and fiscal chops, he also sows plenty of wild oats, targeting both his brother's wife and the divinely delectable lady-in-waiting, Louise de la Baume le Blanc. Oh, and just who is that mysterious man—or boy—in the Iron Mask lurking about in the background? Confining the action to a brief but tumultuous few months, Koen sets the stage for a possible sequel. Period detail and costumes abound throughout this lively royal romp. Copyright 2011 Booklist Reviews.

Koen, well regarded for her royal court dramas (e.g., Through a Glass Darkly), narrows her focus to just a few months of the French monarchy in 1661. The strategy is rewarding—this novel is rich with detail and action, while the pacing is improved and the subject clearer. At 22, Louis XIV is a virile force of nature, contemplating his reign following the death of Cardinal Mazarin. Dutiful affection for his pious Spanish bride is becoming irksome, people at court are living more richly and trying to rule the king—what to do, what to do. History tells us Louis took mistresses and became the textbook example of an absolute monarch, but getting there is marvelous great fun. We come to know his sweet first mistress and watch him blossom into fiscal awareness at financier Colbert's hands. The infamous iron mask is present as plot device in a new form. VERDICT With a handsome ruler as charismatic as Britain's Henry Tudor, this focused retelling of the emergence of the Sun King will attract fans of the English king as well as Francophiles.—Mary K. Bird-Guilliams, Wichita P.L., KS

It's good to be the king, but also lonely and dangerous, according to Koen's lively historical about Louis XIV's efforts to establish himself as a model monarch. The novel begins in 1661, when Cardinal Mazarin's death leaves the superintendent of finance, Nicolas Fouquet, chomping at the bit to take over the most powerful job in France. Unfortunately for him, 22-year-old Louis relies on self-taught Jean-Baptiste Colbert rather than self-serving Fouquet, taking on royal cash-flow problems, civil strife, and international and bedroom politics, only to discover the greatest threat comes from within his own family. Meanwhile, 16-year-old Louise de la Baume le Blanc tries to keep the honor in maid-of-honor, not an easy task when serving Henriette d'Orleans, though Louise is far more interested in a mysterious boy in an iron mask. Thinking about Henriette, Louis comes across Louise. Thinking about the boy, Louise comes across Louis. The rest is history. Following solidly in the footsteps of Dumas, Koen (Dark Angels) reveals independent-spirited Louise to be a modern heroine in period costume, and, with her focus on the time just before Louis becomes the unrivaled Sun King, she finds the era ripe for intrigue and romance, not to mention possible sequels. (June)

Mistress of the sunGulland, Sandra

Love and Louis XIV: the women in the life of the Sun KingFraser, Antonia, 1932-

The queen's fortune: a novel of Desiree, Napoleon, and the dynasty that outlasted the empirePataki, Allison

The devil's queen: a novel of Catherine de MediciKalogridis, Jeanne

The sisters of VersaillesChristie, Sally, 1971-

The many lives & secret sorrows of Josephine B.Gulland, Sandra