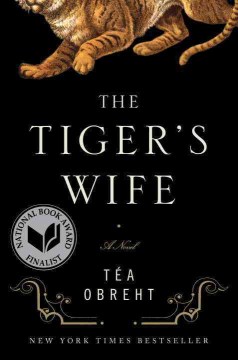 *Starred Review* Not even Obreht's place on the New Yorker's current "20 under 40" list of exceptional writers will prepare readers for the transporting richness and surprise of this gripping novel of legends and loss in a broken land. Drawing on the former Yugoslavia's fabled past and recent bloodshed, Belgrade-born Obreht portrays two besieged doctors. Natalia is on an ill-advised "good will" medical mission at an orphanage on what is suddenly the "other side," now that war has broken out, when she learns that her grandfather, a distinguished doctor forced out of his practice by ethnic divides, has died far from home. She is beset by memories, particularly of her grandfather taking her to the zoo to see the tigers. We learn the source of his fascination in mesmerizing flashbacks, meeting the village butcher, the deaf-mute Muslim woman he married, and a tiger who escaped the city zoo after it was bombed by the Germans. Of equal mythic mystery is the story of the "deathless man." Moments of breathtaking magic, wildness, and beauty are paired with chilling episodes in which superstition overrides reason; fear and hatred smother compassion; and inexplicable horror rules. Every word, every scene, every thought is blazingly alive in this many-faceted, spellbinding, and rending novel of death, succor, and remembrance. Copyright 2011 Booklist Reviews.

In the torn-up Balkans, as medic Natalia is preparing to cross what was once not a border to help vaccinate orphans, she learns that her distinguished physician grandfather has died in an obscure clinic not far from where she's going. No one knows what he was doing there, though Natalia does know he was seriously ill. This incident opens up Obreht's dizzyingly nuanced yet crisp, muscularly written narrative by allowing Natalia to introduce two stories (fables? truth?) that her grandfather related to her. One concerns the "deathless man" her grandfather sometimes encountered, who collected the souls of the dead. The other concerns a tiger that escaped from the zoo during World War II and made its way to the village where her grandfather lived as a boy. Attempts to kill the tiger fail, but the butcher's abused, deaf-mute wife seems mystically connected to the great beast, rousing the villagers' fear and anger. That tiger—and others seen later at the zoo—looms here as a symbol of defiant, struggling hope as the deathless man continues his task. VERDICT Demanding one's full attention, this complex, humbling, and beautifully crafted debut from one of The New Yorker's 20 Under 40 is highly recommended for anyone seriously interested in contemporary fiction. [See Prepub Alert, LJ 10/1/10.]—Barbara Hoffert, Library Journal

The sometimes crushing power of myth, story, and memory is explored in the brilliant debut of Obreht, the youngest of the New Yorker's 20-under-40. Natalia Stefanovi, a doctor living (and, in between suspensions, practicing) in an unnamed country that's a ringer for Obreht's native Croatia, crosses the border in search of answers about the death of her beloved grandfather, who raised her on tales from the village he grew up in, and where, following German bombardment in 1941, a tiger escaped from the zoo in a nearby city and befriended a mysterious deaf-mute woman. The evolving story of the tiger's wife, as the deaf-mute becomes known, forms one of three strands that sustain the novel, the other two being Natalia's efforts to care for orphans and a wayward family who, to lift a curse, are searching for the bones of a long-dead relative; and several of her grandfather's stories about Gavran Gailé, the deathless man, whose appearances coincide with catastrophe and who may hold the key to all the stories that ensnare Natalia. Obreht is an expert at depicting history through aftermath, people through the love they inspire, and place through the stories that endure; the reflected world she creates is both immediately recognizable and a legend in its own right. Obreht is talented far beyond her years, and her unsentimental faith in language, dream, and memory is a pleasure. (Mar.)

A constellation of vital phenomenaMarra, Anthony

The cellist of SarajevoGalloway, Steven, 1975-

The ocean at the end of the laneGaiman, Neil