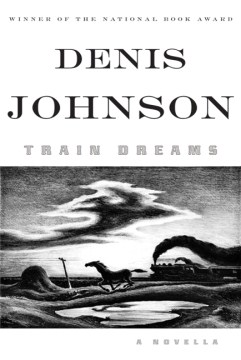 "National Book Award–winner Johnson, ever the literary shape-shifter, looks back to America's expansionist fever dream in a haunting frontier ballad about a loner named Robert Grainier. Left in the dark about why he was put on a train by himself as a young boy and sent cross-country to relatives in Idaho, Grainier revels in the hard, dangerous work and "steadying loneliness" of logging mighty forests and building gravity-defying and spirit-testing railroad bridges over plunging gorges. He finally marries, only to return to the "massive undertakings" he hungers for, leaving his wife and baby girl in their isolated cabin. After hearing about and witnessing myriad crimes and catastrophes embodying the sublime and the macabre, Grainier is blasted into his own private hell of horror and grief. By the time he emerges, cars and planes have further transformed the world. Johnson draws on history and tall tales to adroitly infuse one contemplative man's solitary life with the boundless mysteries of nature and the havoc of humankind's breakneck technological insurgency, creating a concentrated, reverberating tale of ravishing solemnity and molten lyricism." Copyright 2011 Booklist Reviews.

National Book Award winner Johnson is back, and, though brief, his book is sure to pack a punch (just think about Tree of Smoke). Robert Grainer, a day laborer in the early 20th-century American West, suffers all the slings and arrows of outrageous fortune even as the country is radically transformed into something bigger and brighter. With a reading group guide; grab it.

National Book Award winner Johnson (Tree of Smoke) has skillfully packed an epic tale into novella length in this account of the life of Idaho Panhandle railroad laborer Robert Grainer. Born in 1886, orphaned by age six and placed with cousins, he's not outwardly remarkable or compelling as the episodes of his life unfold. He marries Gladys and fathers Kate while working for a timber company, and he witnesses disparate events and characters from influenza epidemics and the advent of automobiles and airplanes to an unscheduled area stop by a young Elvis Presley. Few if any of these leave much of an impression on Robert or on a reader; instead, the appeal here lies in setting and mood. The gothic sensibility of the wilderness and isolated settings and Native American folktales, peppered liberally with natural and human-made violence, add darkness to a work that lingers viscerally with readers. VERDICT Fans of the literary end of historical fiction (with a dash of magical realism), American West/Pacific Northwest settings, or authors like Bret Harte or Cormac McCarthy should appreciate this one. Highly recommended. [See Prepub Alert, 3/7/11.]—Jenn B. Stidham, Houston Community Coll. Northeast, TX

Readers eager for a fat follow-up to Tree of Smoke could be forgiven a modicum of skepticism at this tidy volume—a reissue of a 2003 O. Henry Prize–winning novella that originally appeared in the Paris Review—but it would be a shame to pass up a chance to encounter the synthesis of Johnson's epic sensibilities rendered in miniature in the clipped tone of Jesus' Son. The story is a snapshot of early 20th-century America as railroad laborer Robert Granier toils along the rails that will connect the states and transform his itinerant way of life. Drinking in tent towns and spending summers in the wilds of Idaho, Granier misses the fire back home that leaves no trace of his wife and child. The years bring diminishing opportunities, strange encounters, and stranger dreams, but it's not until after participating in the miracle of flight—and a life-changing encounter with a mythical monster—that Granier realizes what he's been looking for. An ode to the vanished West that captures the splendor of the Rockies as much as the small human mysteries that pass through them, this svelte stand-alone has the virtue of being a gem in itself, and, for the uninitiated, a perfect introduction to Johnson. (Sept.)

The book of illusionsAuster, Paul, 1947-

To dance with the white dogKay, Terry