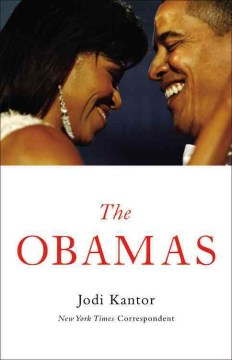 For almost as long as there have been First Ladies, there has been criticism of First Ladies. In recent years, Nancy Reagan was vilified for her extravagances, and Hillary Clinton was accused (among other things) of being complicit in the murder of White House attorney Vince Foster. Nobody's gone that far with Michelle Obama, but like the other women in her position, her clothes, spending, and relationships are under constant scrutiny. Kantor, a New York Times reporter who covered the White House, has received criticism—from the White House and from Michelle Obama personally—for this insider look at the Obamas' marriage. Specifically covered is how the first years of the Obama administration have affected the family and the ways in which the president and the First Lady underestimated how their lives would change and overestimated how they could change the country. But this is the sort of book that is written about every administration—this one's not particularly critical—and if the Obamas have anyone to blame, it's insiders who talked—200 of them, by Kantor's count. Chief among those is former press secretary Robert Gibbs and First Family best friend and presidential advisor Valerie Jarrett (though her comments are mostly benign). Kantor's story line is that President Obama, guilty about having spent so much time away from his family while in Congress and, later, during the presidential campaign, is hesitant to deny the First Lady what perks there are in a lifestyle that has severely limited her ability to lead a normal life. The regular tensions of White House life are exacerbated by the Obamas' being the first African American First Family, with the symbolism that implies. Written briskly and with a knowing tone, this makes for a juicy read—plenty of infighting!—but, ultimately, it tells a familiar story. Copyright 2012 Booklist Reviews.

Washington correspondent for the New York Times, as well as its Arts & Leisure editor, Kantor would seem to have both the knowledge and the sensibility to portray the President and the First Lady as they try to lead a normal life and raise their kids in a house that can't quite feel like home. Kantor's cover story on the Obamas' marriage for the New York Times Magazine was a big hit. So, not a political treatise but no powder-puff job either.

Barack Obama's rise from an unknown Illinois politician to President of the United States was nothing short of meteoric—an unprecedented career trajectory with equal amounts of unique opportunities and challenges. Here, New York Times correspondent Kantor mines her four-plus years of covering the President to craft a complex account of the Obamas' first years in the White House. Drawing from voluminous interviews with over two hundred staffers, friends, aides, cabinet members, and the Obamas themselves, Kantor deftly chronicles the public and private struggles of the First Family. Focusing more on the internal politics than a rote recital of policy changes and key events, her book examines how the couple navigated the Presidency, the White House, and Washington society. The Obamas' commitment to keeping things as normal as possible for their children was laudable, but as the couple soon found out, naïve and riddled with unforeseen political implications. What's more, according to Kantor, the couple's marital dynamics—Barack as the calm, optimistic, focused leader who strove for collaboration, and Michelle as the skeptical perfectionist with little patience for political gamesmanship—also created internal and political tensions. This is a fascinating look at the intricate dynamics of an ordinary marriage, an unusual home, and an extraordinary presidency. B&W photos. (Jan.)

Barack and Michelle: portrait of an American marriageAndersen, Christopher P.

The butler: a witness to historyHaygood, Wil

America's first families: an inside view of 200 years of private life in the White HouseAnthony, Carl Sferrazza

First families: the impact of the White House on their livesAngelo, Bonnie

The truth about Hillary: what she knew, when she knew it, and how far she'll go to become presidentKlein, Edward, 1936-

Fire and fury: inside the Trump White HouseWolff, Michael, 1953-

Crisis of character: a White House Secret Service officer discloses his firsthand experience with Hillary, Bill, and how they operateByrne, Gary J.

The world as it is: a memoir of the Obama White HouseRhodes, Benjamin J., 1977-