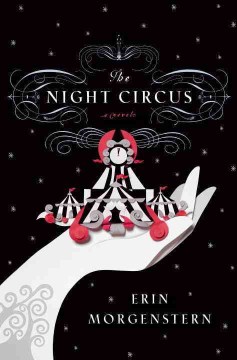 *Starred Review* This big and—no, not bulky—compelling first novel ushers in a menacing tone with its first sentence: The circus arrives without warning. Why would a circus arrive so quietly in town, and why would anyone need warning about this particular one? The time span here is 30 years, from 1873 to 1903, and the settings range from America to Europe. To a famous magician is delivered a little girl who, as it turns out, is his child, and fortunately for his future, she is possessed of magical powers. As it also happens, this magician has an archrival, who, in the face of the first magician's jackpot in the form of his little girl, seeks a young person for him to train to rival her. What the two magicians did not anticipate, as the years pass and the two young people, the girl and the boy whom the second magician found, are honed in their specialty for performance's sake and to outplay the other one, is that the young persons, when of an age, would meet and, surprising or not to the reader, fall in love. How will their destiny play out now? With appeal for readers not particularly geared to fantasy but who plainly enjoy an unusual and well-drawn story, this one will make a good crossover suggestion. Copyright 2011 Booklist Reviews.

When Prospero the Enchanter discovers that he has a young daughter with extraordinary magical talents, he wastes no time in setting up a competition between her and the protégé of his longtime adversary. Celia and Marco train until young adulthood and eventually meet under the eerie black-and-white-striped tents of the Cirque des Rêves—the Circus of Dreams. What happens next has obviously intrigued a lot of people—rights for this debut have been sold to 22 countries, Summit Entertainment has made a film deal, and there's a 175,000-copy first printing. Not over-the-top kaleidoscopic but keenly, lushly cool and inventive with a hint of danger and reckless love; remember, this circus "Opens at Nightfall/ Closes at Dawn." Puts me in mind of Ray Bradbury's Something Wicked This Way Comes lightened up by Harry Potter. This will be big.

To enter the black-and-white-striped tents of Le Cirque des Rêves is to enter a world where objects really do turn into birds and people really do disappear. Even though visitors believe the performances are all illusion, they are obsessively drawn to this extraordinary night circus. Those who run and perform in the circus are its lifeblood. Marco Alisdair runs the operation from London as assistant to the eccentric proprietor. Celia Bowen holds it all together from her role as illusionist. As magicians, Marco and Celia are bound to each other in a deadly competition of powers, creating ever more fantastical venues for circus goers to marvel at. But falling in love was never part of the game, and the players struggle to extricate themselves from this contest while keeping the circus afloat. VERDICT Debut novelist Morgenstern has written a 19th-century flight of fancy that is, nevertheless, completely believable. The smells, textures, sounds, and sights are almost palpable. A literary Mr. Toad's Wild Ride, this read is completely magical. [See Prepub Alert, 3/7/11.]—Joy Humphrey, Pepperdine Univ. Law Lib., Malibu, CA

Morgenstern's much-hyped debut-it was previewed by Barbara Hoffert in Prepub Alert, garnered a starred LJ review, and topped the September 2011 Indie Next List-is a generous and unexpected novel, fancifully articulated through a time-spanning plot that unfolds in connected interludes. Readers are welcomed into Le Cirque des Rêves-the Circus of Dreams-on the first few pages: under the popping lights, through the spacious veil of stars, into a labyrinthine space of black-and-white-striped tents filled with such attractions as an ice garden, a cloud maze, and a bonfire of crimson, violet, and white. From this initial invitation, the story jumps back and forth in time between 1837 and 1903, exploring the interrelated tales of a handful of characters. The weaving creates a lovely, restrained pacing, allowing readers to stroll through the story the way they would through the circus itself. At the narrative's core are two magicians, Celia and Marco, who have been set among the circus tents as figures on a magical chessboard. They are to play a game run by Celia's father and his nemesis, Alexander, a game the two masters have orchestrated many times before. What is at stake, how the game is played, and even the length of the game are unknown to Celia and Marco, who at first compete, but soon cannot resist collaborating to create ever-more fantastical attractions for the circus. As they forge the sumptuous revelry inside the tents, the two slowly fall in love, and their relationship is as fragile as the folded-paper models Marco uses to keep up with the circus and the mysterious scrapbook he employs to ensure the circus doesn't unravel. But unravel it does, as the circus was not designed as anything other than a battlefield. As the fate of the citizens of Le Cirque des Rêves, and that of a few key outside supporters, hangs by a thread, Celia and Marco must figure out how to escape the game. Evoking a mood of wonderment complemented by a portentous feel, the novel's lush language and charming sensibility will lure readers in as surely as tent signs such as A Climb Through the Firmament lure visitors into Le Cirque des Rêves. Note to audio fans: Don't miss Jim Dale's extraordinary reading. - Neal Wyatt, "RA Crossroads," Booksmack! 10/6/11 (c) Copyright 2011. Library Journals LLC, a wholly owned subsidiary of Media Source, Inc. No redistribution permitted.

Debut author Morgenstern doesn't miss a beat in this smashing tale of greed, fate, and love set in a turn of the 20th-century circus. Celia is a five-year-old with untrained psychokinetic powers when she is unceremoniously dumped on her unsuspecting father, Hector Bowen, better known as Le Cirque des Reves' Prospero the Entertainer. Hector immediately hatches a sinister scheme for Celia: pit her against a rival's young magician in an epic battle of magic that will, by design, result in the death of one of the players, though neither Celia nor her adversary, Marco, is informed of the inevitable outcome. What neither Hector nor his rival count on is that Celia and Marco will eventually fall in love. Their mentors—Marco's mentor, Alexander, plucked him from the London streets due to his psychic abilities—attempt to intervene with little success as Celia and Marco barrel toward an unexpected and oddly fitting conclusion. Supporting characters—such as Bailey, a farm boy who befriends a set of twins born into the circus who will drastically influence his future; Isobel, a circus employee and onetime girlfriend of Marco's; and theatrical producer Chandresh Christophe Lefèvre—are perfectly realized and live easily in a giant, magical story destined for bestsellerdom. This is an electric debut on par with Special Topics in Calamity Physics. (Sept.)

The book of speculationSwyler, Erika

The Museum of Extraordinary ThingsHoffman, Alice