The beginner's goodbye : a novel / by Anne Tyler. 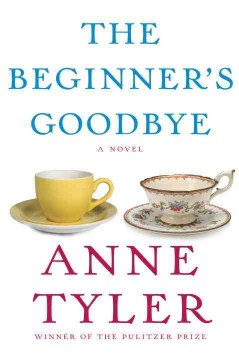 *Starred Review* Tyler's bright charm resides in her signature blend of the serious with the larky. Adept at dissecting family life, she is also intrigued by lonely guys, the focus in The Accidental Tourist (1985), A Patchwork Planet (1998), and Noah's Compass (2009). Her newest variation on this theme is an exceptionally lithe, sparkling, and covertly philosophical tale, set, as all her novels are, in Baltimore. Hampered with a crippled leg and arm, Aaron has always refused to be coddled, fending off his guilt-ridden mother and strong-willed sister. He married Dorothy, a doctor, because he loved her brusqueness and pragmatism. He is devastated when she dies in a freak accident that destroys their house until Dorothy begins returning from beyond. These precious, if mysterious, encounters are all that matter to Aaron. He moves in with his sister, turns his wrecked house over to Gil, a sympathetic contractor, and barricades himself in his office at his family's vanity press to avoid frilly, cookie-baking, overly helpful Peggy. The press stays afloat by selling its Beginner's series, little how-to books that Tyler astutely uses to illuminate how ill-prepared we are for life's relentless demands. As Gil restores Aaron's home, Aaron slowly rebuilds his life in this funny, sweet, and wise tale of lost and found love. HIGH-DEMAND BACKSTORY: With a generous print run and ambitious national promotion, this scintillating gem of a novel will be one of Tyler's most popular hits. Copyright 2012 Booklist Reviews.

Although crippled in his right arm and leg, Aaron has spent much of his life fending off his family's attempts to protect him from the world. A successful editor of a vanity press in Baltimore that publishes a series of beginner's guides to various subjects, Aaron one day finds himself falling in love with Dr. Dorothy Rosales, whom he has approached about helping to write The Beginner's Cancer. They soon end up married, but catastrophe strikes when a tree falls on their house and kills Dorothy. Unable to live in his house any longer because of memories and roof damage, Aaron goes to live with his sister. He moves through loss, despair, helplessness, and emotional paralysis until one day Dorothy appears to him in the street. Struggling with the meaning of her appearances, Aaron eventually comes to accept them as her way of both saying good-bye and helping him get over her death. VERDICT As always, Pulitzer Prize winner Tyler brilliantly explores a stunning range of human emotion, poignantly considering the challenges of death while creating lovable characters whose foibles capture our hearts. Essential reading. [See Prepub Alert, 9/30/11.]—Henry L. Carrigan Jr., Evanston, IL

In Tyler's elegant 19th novel, Aaron is an editor at a vanity press with a crippled right arm and leg who thinks of himself as "unluckier but no unhappier" than anyone else. He meets Dorothy, a brisk, no nonsense doctor, while editing a medical tome, and they fall in love, marry, and muddle along until Dorothy dies in an accident that nearly destroys their home. Aaron moves in with his overprotective sister and begins seeing Dorothy's ghost, spectral appearances that make him realize just how many fissures there were in their marriage. Tyler's gentle style focuses on the details of daily life, and how the little things, both beautiful and ugly, contribute to the bigger picture. Tyler (Breathing Lessons, awarded the Pulitzer Prize in 1988) portrays complex, difficult, loving individuals struggling to co-exist and find happiness together. This is no gothic ghost story nor chronicle of a man unraveling in his grief, but rather an uplifting tale of love and forgiveness. By the end of this wonderful book, you've lived the lives and loves of these characters in the best possible way. Agent: Jesseca Salky, Hannigan Salky Getzler. 150,000-copy announced first printing. (Apr.)