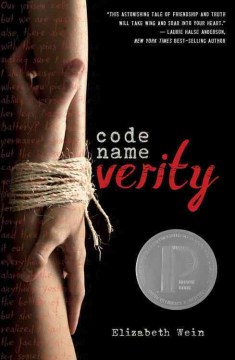 *Starred Review* If you pick up this book, it will be some time before you put your dog-eared, tear-stained copy back down. Wein succeeds on three fronts: historical verisimilitude, gut-wrenching mystery, and a first-person voice of such confidence and flair that the protagonist might become a classic character—if only we knew what to call her. Alternately dubbed Queenie, Eva, Katharina, Verity, or Julie depending on which double-agent operation she's involved in, she pens her tale as a confession while strapped to a chair and recovering from the latest round of Gestapo torture. The Nazis want the codes that Julie memorized as a wireless operator before crash-landing in France, and she supplies them, but along the way also tells of her fierce friendship with Maddie, a British pilot whose quiet gumption was every bit as impressive as Julie's brash fearlessness. Though delivered at knifepoint, Julie's narrative is peppered with dark humor and minor acts of defiance, and the tension that builds up between both past and present story lines is practically unbearable. A surprise change of perspective hammers home the devastating final third of the book, which reveals that Julie was even more courageous than we believed. Both crushingly sad and hugely inspirational, this plausible, unsentimental novel will thoroughly move even the most cynical of readers. Copyright 2012 Booklist Reviews.

Wein's exceptional--downright sizzling--abilities as a writer of historical adventure fiction are spectacularly evident in this taut, captivating story of two young women, spy and pilot, during World War II. Wein gives us multiple doubletakes and surprises as she ratchets up the tension in captured spy Queenie's story of her best friend Maddie, the pilot who dropped her over France, then crashed.

Wein's exceptional -- downright sizzling -- abilities as a writer of historical adventure fiction are spectacularly evident in this taut, captivating story of two young women, spy and pilot, during World War II. Wein gives us the story in two consecutive parts -- the first an account by Queenie (a.k.a. Lady Julia Beaufort-Stuart), a spy captured by the SS during a mission in Nazi-occupied France. Queenie has bargained with Hauptsturmführer von Linden to write what she knows about the British war effort in order to postpone her inevitable execution. Sounding like a cross between Swallows and Amazons's Nancy Blackett and Mata Hari, she alternately succumbs to, cheeks, and charms her captors (and readers) as she duly writes her report and, mostly, tells the story of her best friend Maddie, the pilot who dropped her over France, then crashed. Spoiler: unbeknownst to Queenie, Maddie survived the crash; part two is Maddie's "accident report" and account of her efforts to save Queenie. Wein gives us multiple doubletakes and surprises as she ratchets up the tension in Maddie's story, revealing Queenie's joyously clever duplicity and the indefatigable courage of both women. This novel positively soars, in part no doubt because the descriptions of flying derive from Wein's own experience as a pilot. But it's outstanding in all its features -- its warm, ebullient characterization; its engagement with historical facts; its ingenious plot and dramatic suspense; and its intelligent, vivid writing. deirdre f. baker Copyright 2012 Horn Book Magazine Reviews.

"I am a coward," begins the confession of a spy taken behind enemy lines in the bitter middle of World War II. English-raised Julie ("Verity") was caught when she looked the wrong way crossing the street in Vichy France and now confides to the reader that she will say anything to end the torture of her interrogation. Her lengthy admission tells the story of two best friends who would never have met under other circumstances—one a spy and the other a pilot, one an aristocrat and the other the granddaughter of a Jewish mechanic—and the events leading up to her capture. Just as Verity's story concludes, a second narrative exposes the truth and the lies contained therein and cements the tragedy of two forever-friends forced by war to make the most difficult of choices. Part narrative double helix, part historical spy novel, and, in the end, a loving tribute to the heroism of young resistance volunteers, this literary high-wire act is impossible to appreciate in one reading. Unforgettable. (c) Copyright 2011. Library Journals LLC, a wholly owned subsidiary of Media Source, Inc. No redistribution permitted.

A quick-witted British girl whose plane has crashed in Nazi-occupied France is forced by the Gestapo to confess to her country's war plans. Her writings detail her friendship with Maddie, the pilot who crashed the plane. A must for young adult collections, as is Wein's companion novel, Rose Under Fire, whose intelligence and emotional depth will appeal to adult readers as well. Pearl Cornioley's autobiography, Code Name Pauline, covers similar ground and can provide needed context to Wein's story. (LJ 11/15/12)

Wein (The Empty Kingdom) serves up a riveting and often brutal tale of WWII action and espionage with a powerful friendship at its core. Captured Scottish spy Queenie has agreed to tell her tale—and reveal any confidential information she knows—in exchange for relief from being tortured by Nazis. Her story, which alternates between her early friendship with a pilot named Maddie and her recent sufferings in prison, works both as a story of cross-class friendship (from an upper-crust family, Queenie realizes that she would likely never have met Maddie under other circumstances) and as a harrowing spy story (Queenie's captor, von Loewe, is humanized without losing his menace). Queenie's deliberately rambling and unreliable narration keeps the story engaging, and there are enough action sequences and well-delivered twists (including a gut-wrenching climax and late revelations that will have readers returning to reread the first half of the book) to please readers of all stripes. Wein balances the horrors of war against genuine heroics, delivering a well-researched and expertly crafted adventure. Ages 14–up. Agent: Ginger Clark, Curtis Brown. (May)

Girl in the blue coatHesse, Monica

Among the Red StarsKatz, Gwen C.