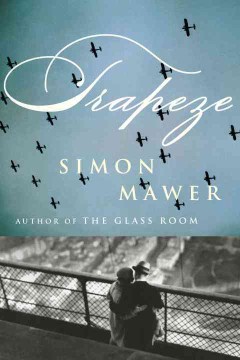 *Starred Review* Recruited initially for her fluency in speaking French, 19-year-old Marian Sutro survives rigorous training to become a valued operative in the British Special Operations Executives during World War II. Dropped into German-occupied Paris by parachute in an operation called Trapeze, she has a primary task of bringing research physicist Clement Pelletier, a man she loved at the age of 16, to England to help create the atomic bomb. The danger in Marian's work is palpable, despite the youth and beauty that is intended to make her a less likely terrorist in German eyes, as she goes about her tasks under various code names while struggling with her feelings for fellow operative Benoit, with whom she loses her virginity, and now-married Clement. Much-lauded British author Mawer vividly describes the deprivations in a war-occupied country and its once-vibrant capital and provides testimony to the courage of countless members of the French Resistance. But this is primarily a masterfully crafted homage to the 53 extraordinary women of the French section of the SOE on whose actual exploits the novel is based. With its lyrical yet spare prose and heart-pounding climax, this is a compelling historical thriller of the highest order. Copyright 2012 Booklist Reviews.

Nineteen-year-old Marian Sutro is doing her part to support the British war effort as a member of the Women's Auxillary Air Force (WAAF). She is strong, tenacious, and flawlessly fluent in French. These attributes lead the Special Operations Executive (SOE) to recruit her for sabotage and espionage work in German-occupied France. Marian's mission is further complicated when she is ordered to find and convince an old flame, now a physicist working on a new bomb, to join the Allies. VERDICT Blending fact with fiction, Mawer's (The Glass Room) latest novel is a historical spy thriller with a realistic feminine voice that should appeal to a wide readership. The writing is fast-paced and engrossing. Occasional dry spots are juiced up with plenty of Paris dazzle, heart, and action. [See Prepub Alert, 2/27/12; for a nonfiction account of the SOE's activities, see Sarah Helm's A Life in Secrets: Vera Atkins and the Missing Agents of WWII.—Ed.]—Therese Oneill, Monmouth, OR

Only 19, native French speaker Marian Sutro is trained as an agent by the Special Operations Executive and parachuted into wartime France. Her mission, to join the WORDSMITH resistance network, has been hijacked by yet another secret organization, which wants her to persuade a research scientist in Paris to join the Allied effort. Mawer's The Glass Room was both a New York Times best seller and a Man Booker Prize shortlisted title, so this looks promising indeed. - "Mantel to Zafón " LJ Reviews 3/1/2012 (c) Copyright 2011. Library Journals LLC, a wholly owned subsidiary of Media Source, Inc. No redistribution permitted.

Mawer follows his Man Booker–shortlisted The Glass Room with another WWII novel based on the fascinating true story of Englishwomen whose French-language fluency led them to be deployed, via parachute, into France as agents of the resistance. The young Marian Sutro is one such woman, recruited to join the mission that gives Mawer his title, which sends her behind enemy lines in occupied France and connects her with loves both old and new. Though Marian's naïveté and willful carelessness make her an improbable operative, her (somewhat convenient) ties to scientists researching the atomic bomb put her in a powerful and dangerous position. Slow to start (Marian's drop into France comes well into the story), the novel picks up when she navigates the dangerous world of occupied Paris, constantly questioning who she can trust and who will betray her. While the history behind this story is captivating, Mawer's take unfolds with inertia, is leaden with research that often feels unnecessary to the story, and is plagued with undeveloped characters, particularly his young heroine. Agent: Peter Matson, Sterling Lord Literistic. (May)

A hero of FranceFurst, Alan

A life in secrets: Vera Atkins and the missing agents of WWIIHelm, Sarah

The Star of IstanbulButler, Robert Olen