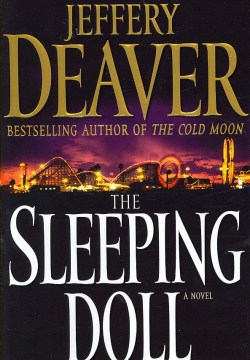 A Charles Manson-esque killer escapes prison, and special agent Kathryn Dance must enlist the help of three women and a young girl from his past. The popular Deaver lives in North Carolina and California. A 12-city tour. Copyright 2007 Reed Business Information.

An explosive prison escape in the opening pages sets a dynamic pace in Deaver's newest suspense thriller. Kathryn Dance, the kinesics expert from the California Bureau of Investigation first introduced in last year's The Cold Moon , an entry in the Lincoln Rhyme/Amelia Sachs series, leads the investigation in this psychological exploration of a cult leader's mentality. Years earlier, Daniel Pell masterminded the brutal Charles Manson-like murder of a wealthy Silicon Valley entrepreneur and his family. Now he's escaped, and his perceived evilness sends California into high-panic mode. With her knack for reading people's body language, Dance joins with her team to assemble an unconventional group of helpers in a Monterey-based pursuit so full of twists and turns that the reader will feel unsettled even after the last page. Pell's "family" of three former cult members and the only survivor of the original murder all help Dance outsmart Pell, a self-taught Pied Piper. Deaver is still fleshing out Dance and her partners, but we sense a series coming—if not another movie (two of Deaver's books have already been adapted to the screen). Recommended for all popular collections. [See Prepub Alert, LJ 2/15/07 and Prepub Mystery, LJ 2/1/07.]—Teresa L. Jacobsen, Solano Cty. Lib., Fairfield, CA

Jeffery Deaver evokes pure evil in The Sleeping Doll (S. & S. 2007. ISBN 978-0-7432-6094-7. $26.95). Convicted of masterminding the brutal murders of a Silicon Valley entrepreneur and his family, Daniel Pell is nicknamed "Son of Manson" because he eerily parallels the 1960s sadistic killer. When Pell escapes from prison, California Bureau of Investigation interrogator and kinesics expert Kathryn Dance must track him down before he kills again. Copyright 2007 Reed Business Information.

Kathryn Dance, an investigator with the California Bureau of Investigation, returns from Deaver's The Cold Moon (where she was a secondary) in this post–prison break pulse-pounder. Dance is the lead cop handling the escape of psychopathic killer Daniel Pell, dubbed "Son of Manson" by the press for his "family" of young runaways and his most horrendous crime, the murders of computer engineer William Croyton, Croyton's wife and two of their three children. The only child left alive, nine-year-old Theresa, is known as the Sleeping Doll. Pell, charismatic and diabolically intelligent, continually eludes capture, but Dance, a specialist in interrogation and kinesics (or body language), is never more than a few suspenseful minutes behind. Dance is nicely detailed, and procedural scenes where she uses somatic cues to ferret out liars are fascinating. The book sags in its long middle, but toward the end Deaver digs into his bottomless bag of unexpected twists and turns, keeping readers wide-eyed with surprise, and leaving them looking forward to more of the perspicacious Dance. (June)

Rage against the dyingMasterman, Becky

Deeper than the deadHoag, Tami