And the mountains echoed / Khaled Hosseini. 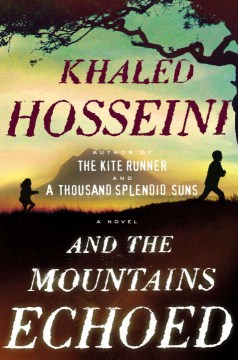 *Starred Review* Saboor, a laborer, pulls his young daughter, Pari, and his son, Abdullah, across the desert in a red wagon, leaving their poor village of Shadbagh for Kabul, where his brother-in-law, Nabi, a chauffeur, will introduce them to a wealthy man and his beautiful, despairing poet wife. So begins the third captivating and affecting novel by the internationally best-selling author of The Kite Runner (2003) and A Thousand Splendid Suns (2007). An immense, ancient oak stands in Shadbagh, emblematic of the complexly branching stories in Hosseini's vital, profound, and spellbinding saga of family bonds and unlikely pairings forged by chance, choice, and necessity. We meet twin sisters, one beautiful, one plain; one an invalid, the other a caretaker. Two male cousins, one a charismatic wheeler-dealer; the other a cautious, introverted doctor. A disfigured girl of great valor and a boy destined to become a plastic surgeon. Kabul falls and struggles to rise. Shadbagh comes under the rule of a drug lord, and the novel's many limbs reach to Paris, San Francisco, and a Greek island. A masterful and compassionate storyteller, Hosseini traces the traumas and scarring of tyranny, war, crime, lies, and illness in the intricately interconnected, heartbreaking, and extraordinary lives of his vibrantly realized characters to create a grand and encompassing tree of life. HIGH-DEMAND BACKSTORY: The immense popularity of Hosseini's previous books ensures a high-profile promotional campaign and mounting word-of-mouth excitement in anticipation of the release of his first new novel in six years. Copyright 2012 Booklist Reviews.

This book from Kite Runner author Hosseini explores how we love and care for others, especially family. A multigenerational saga that broadens Hosseini's scope.

This bittersweet family saga spans six decades and transports readers from Afghanistan to France, Greece, and the United States. Hosseini (The Kite Runner; A Thousand Splendid Suns) weaves a gorgeous tapestry of disparate characters joined by threads of blood and fate. Siblings Pari and Abdullah are cruelly separated at childhood. A disfigured young woman, Thalia is abandoned by her mother and learns to love herself under the tutelage of a surrogate. Markos, a doctor who travels the world healing strangers, avoids his sick mother back home. A feminist poet, Nila Wahdatire, reinvents herself through an artful magazine interview, and Nabi, who is burdened by a past deed, leaves a letter of explanation. Each character tells his or her version of the same story of selfishness and selflessness, acceptance and forgiveness, but most important, of love in all its complex iterations. VERDICT In this uplifting and deeply satisfying book, Hosseini displays an optimism not so obvious in his previous works. Readers will be clamoring for it. [See Prepub Alert, 11/04/12.]—Sally Bissell, Lee Cty. Lib. Syst., Estero, FL

Though Hosseini returns once again to Afghanistan—the scene of his breakout title, The Kite Runner—as a primary setting, this ambitious and emotionally stirring work follows myriad characters all across the globe over six decades. At the heart of the narrative is the wrenching separation of two siblings, Pari and Abdul, a loss that haunts both for the rest of their days. From there, the author weaves an intricate web of interconnected tales of regret, longing, love, jealousy, shame, and grief. Hosseini's gift is his ability to humanize even the most seemingly unlikable characters, and though many of these stories are devastatingly painful, an overarching sense of joy and optimism infuses this rich tapestry. (LJ 4/1/13)—MD (c) Copyright 2013. Library Journals LLC, a wholly owned subsidiary of Media Source, Inc. No redistribution permitted.

Hosseini's third novel (after A Thousand Splendid Suns) follows a close-knit but oft-separated Afghan family through love, wars, and losses more painful than death. The story opens in 1952 in the village of Shadbagh, outside of Kabul, as a laborer, Kaboor, relates a haunting parable of triumph and loss to his son, Abdullah. The novel's core, however, is the sale for adoption of the Kaboor's three-year-old daughter, Pari, to the wealthy poet Nila Wahdati and her husband, Suleiman, by Pari's step-uncle Nabi. The split is particularly difficult for Abdullah, who took care of his sister after their mother's death. Once Suleiman has a stroke, Nila leaves him to Nabi's care and takes Pari to live in Paris. Much later, during the U.S. occupation, the dying Nabi makes Markos, a Greek plastic surgeon now renting the Wahdati house, promise to find Pari and give her a letter containing the truth. The beautiful writing, full of universal truths of loss and identity, makes each section a jewel, even if the bigger picture, which eventually expands to include Pari's life in France, sometimes feels disjointed. Still, Hosseini's eye for detail and emotional geography makes this a haunting read. Agent: Elaine Koster, Elaine Koster Agency. (May)

The beekeeper of AleppoLefteri, Christy, 1980-