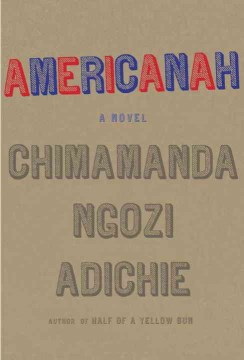 *Starred Review* To the women in the hair-braiding salon, Ifemelu seems to have everything a Nigerian immigrant in America could desire, but the culture shock, hardships, and racism she's endured have left her feeling like she has "cement in her soul." Smart, irreverent, and outspoken, she reluctantly left Nigeria on a college scholarship. Her aunty Uju, the pampered mistress of a general in Lagos, is now struggling on her own in the U.S., trying to secure her medical license. Ifemelu's discouraging job search brings on desperation and depression until a babysitting gig leads to a cashmere-and-champagne romance with a wealthy white man. Astonished at the labyrinthine racial strictures she's confronted with, Ifemelu, defining herself as a "Non-American Black," launches an audacious, provocative, and instantly popular blog in which she explores what she calls Racial Disorder Syndrome. Meanwhile, her abandoned true love, Obinze, is suffering his own cold miseries as an unwanted African in London. MacArthur fellow Adichie (The Thing around Your Neck, 2009) is a word-by-word virtuoso with a sure grasp of social conundrums in Nigeria, East Coast America, and England; an omnivorous eye for resonant detail; a gift for authentic characters; pyrotechnic wit; and deep humanitarianism. Americanah is a courageous, world-class novel about independence, integrity, community, and love and what it takes to become a "full human being." Copyright 2012 Booklist Reviews.

Ifemelu, the Nigerian expat and Princeton lecturer at the heart of this latest novel by Orange Prize winner Adichie (Half of a Yellow Sun), writes biting, dead-on blog posts taking aim at the cultural schism between non-African blacks, Africans, and everyone else. She also observes her Auntie Uju turning herself inside out to attract a man as Ifemelu's nephew silently accepts his mother's aspirations. Whether Ifemelu is writing a treatise on how to care for black hair or a scathing take on American students earning extra credit for bombast, her opinions bring her money and acknowledgment. But one day, as she is complimented on her nurtured American accent, Ifemelu senses that she has lost her way. A parallel plotline follows Obinze, the man Ifemelu left behind in Lagos, who emigrated to London and longs for a life in America with her. VERDICT Witty, wry, and observant, Adichie is a marvelous storyteller who writes passionately about the difficulty of assimilation and the love that binds a man, a woman, and their homeland. Her work should be read by anyone clutching at the belief that we're living in a post-racial United States.—Sally Bissell, Lee Cty. Lib. Syst., Estero, FL

Adichie burst onto the literary scene in 2006 with Half of a Yellow Sun, her searing depiction of the civil war in Nigeria. Her equally compelling and important new novel follows the lives of that country's postwar generation as they suffer endemic corruption and poverty under a military dictatorship. An unflinching but compassionate observer, Adichie writes a vibrant tale about love, betrayal, and destiny; about racism; and about a society in which honesty is extinct and cynicism is the national philosophy. She broadens her canvas to include both America and England, where she illuminates the precarious tightrope existence of culturally and racially displaced immigrants. The friendship of Ifemelu and Obinze begins in secondary school in Lagos and blossoms into love. When Ifemelu earns a scholarship to an American college, Obinze intends to join her after his university graduation, but he's denied a U.S. visa. He manages to get to London where his plight is typical of illegal immigrants there: he uses another man's ID so he can find menial, off-the-grid work, with the attendant loss of dignity and self-respect. The final blow comes when he's arrested and deported home. Ifemelu, meanwhile, faces the same humiliations, indignities, and privations—first in New York, then in Philadelphia. There, attending college, she's unable to find a job and descends to a degrading sexual act in order to pay her rent. Later she becomes a babysitter for a wealthy white family and begins writing a provocative blog on being black in America that bristles with sharp, incisive observations about racism. Ifemelu writes that the painful, expensive process of "relaxing" kinky African hair to conform to cultural expectations brings black women dangerously close to self-hatred. In time the blog earns Ifemelu fame and a fellowship to Princeton, where she has love affairs with a wealthy white man and, later, an African-American Yale professor. Her decision to return home to Nigeria (where she risks being designated as an affected "Americanah") is the turning point of the novel's touching love story and an illuminating portrait of a country still in political turmoil. Announced first printing of 60,000. Agent: Sarah Chalfant, the Wylie Agency. (May 17)

In the midst of winterAllende, Isabel