Still foolin' 'em : where I've been, where I'm going, and where the hell are my keys? / Billy Crystal. 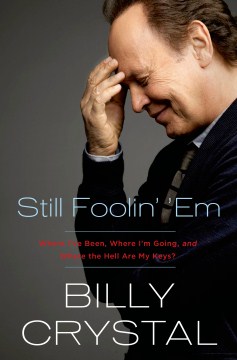 *Starred Review* If you've been paying attention for the last few decades, you're probably familiar with the career of Billy Crystal: his stand-up roots, his controversial role on the sitcom Soap, his run on Saturday Night Live, his Oscar-hosting turn, his movies (City Slickers and When Harry Met Sally, among many others). Why, you might be wondering, do I need to read the book when I already know the guy? Here's one reason: the book is massively laugh-out-loud funny. Here, on the very second page, for example, he writes about getting older: "Why does God make everything small that should be big and everything big that should be small? Like my nuts, why are they now HUGE? Every time I sit on the toilet, I make tea with my balls." If you're not laughing, then you didn't read that right. Crystal, who turned 65 in March 2013, reflects on his life and career and the joys of aging, and the book has a lot of surprises, ranging from the story of how he created the character of Fernando (the "You look mahvelous" guy) to his brief stint as a player with the New York Yankees. Hollywood memoirs don't come much more entertaining than this one, and the book reinforces one thing we've always known about Crystal: he's a genuinely funny, genuinely nice guy. Copyright 2013 Booklist Reviews.

Not just a look back at Crystal's career as an actor and Academy Awards host, this work captures for every baby boomer (and other interested readers) the joys and horrors of turning 65, as Crystal does next year. Wry (with chapters like "Drugs We Did Then, Drugs We Do Now") but touching as Crystal reflects on his final conversation with his father. He'll promote in a big way.

Avoiding the trappings—excess schmaltz, laundry list of famous friends, boozy party log—of so many celebrity memoirs, Crystal delivers a funny and genuinely moving chronicle of his life inside and outside Hollywood. The quips come as fast they do in the best Crystal films and Oscar hostings, making sure the reader knows that there isn't a ghost writer guiding this one. Now 65, Crystal, the youngest of three brothers, was a comic from the start, soaking up all he could from the TV comedians of the '50s during his childhood in the New York suburbs. In addition to loving comedy, Crystal grew up loving music (his father owned a popular record store in the city) and, of course, baseball. Both of these passions stayed with him throughout his life and, something most fans could only dream of, Crystal not only met but befriended idols like Mickey Mantle and boxer Muhammad Ali. His successes are balanced with opportunities that didn't pan out, or movies that fizzled at the box office: a last-minute cancellation of a semi-permanent gig with the then-fledgling Saturday Night Live is outshone by the opportunity to perform on the Tonight Show with Johnny Carson. In addition to providing the inside scoop on some of his most iconic roles, from Harry to Princess, Crystal manages the extremely difficult feat of making his prose as vibrant and funny as his stand-up. He'll always be a hard act to follow. (Sept.)

I feel bad about my neck: and other thoughts on being a womanEphron, Nora

This time together: laughter and reflectionBurnett, Carol