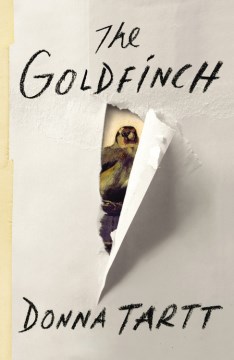 *Starred Review* Cataclysmic loss and rupture with criminal intent visited upon the young have been Tartt's epic subjects as she creates one captivating and capacious novel a decade, from The Secret History (1992) to The Little Friend (2002) to this feverish saga. In the wake of his nefarious father's abandonment, Theo, a smart, 13-year-old Manhattanite, is extremely close to his vivacious mother—until an act of terrorism catapults him into a dizzying world bereft of gravity, certainty, or love. Tartt writes from Theo's point of view with fierce exactitude and magnetic emotion as, stricken with grief and post-traumatic stress syndrome, he seeks sanctuary with a troubled Park Avenue family and, in Greenwich Village, with a kind and gifted restorer of antique furniture. Fate then delivers Theo to utterly alien Las Vegas, where he meets young outlaw Boris. As Theo becomes a complexly damaged adult, Tartt, in a boa constrictor-like plot, pulls him deeply into the shadow lands of art, lashed to seventeenth-century Dutch artist Carel Fabritius and his exquisite if sinister painting, The Goldfinch. Drenched in sensory detail, infused with Theo's churning thoughts and feelings, sparked by nimble dialogue, and propelled by escalating cosmic angst and thriller action, Tartt's trenchant, defiant, engrossing, and rocketing novel conducts a grand inquiry into the mystery and sorrow of survival, beauty and obsession, and the promise of art.HIGH-DEMAND BACKSTORY: Word of best-selling Tartt's eagerly awaited third novel will travel fast and far via an author tour, interviews, and intense print, media, and online publicity. Copyright 2013 Booklist Reviews.

In Tartt's much-anticipated latest, following 1992's The Secret History and 2002's The Little Friend, young Theo survives an accident that kills his mother. Abandoned by his father, he lives with a friend's family in New York, where his obsession with a small painting that reminds him of his mother leads him to the art underworld. With a 250,000-copy first printing and what's billed as a social media extravaganza.

Donna Tartt's latest novel clocks in at an unwieldy 784 pages. The story begins with an explosion at the Metropolitan Museum that kills narrator Theo Decker's beloved mother and results in his unlikely possession of a Dutch masterwork called The Goldfinch. Shootouts, gangsters, pillowcases, storage lockers, and the black market for art all play parts in the ensuing life of the painting in Theo's care. Tartt's flair for suspense, on display in The Secret History (2005), features the pulp of a typical bildungsroman—Theo's dissolution into teenage delinquency and climb back out, his passionate friendship with the very funny Boris, his obsession with Pippa (a girl he first encounters minutes before the explosion)—but the painting is the novel's secret heart. Theo's fate hinges on the painting, and both take on depth as it steers Theo's life. Some sentences are clunky ("suddenly" and "meanwhile" abound), metaphors are repetitive (Theo's mother is compared to birds three times in 10 pages), and plot points are overly coincidental (as if inspired by TV), but there's a bewitching urgency to the narration that's impossible to resist. Theo is magnetic, perhaps because of his well-meaning criminality. The Goldfinch is a pleasure to read; with more economy to the brushstrokes, it might have been great. Agent: Amanda Urban, ICM. (Oct. 22)