The death of bees : a novel / Lisa O'Donnell. 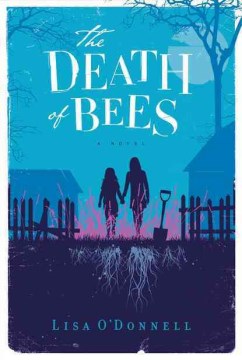 *Starred Review* Marnie and Nelly have just buried their parents in the garden behind the Glasgow housing development where they live. Their father, Gene, was a drug addict attracted to young girls. Their mother, Izzy, was a boozer who paid little attention to the care and safety of her daughters. Gene died of dubious causes, and Izzy killed herself in grief. The girls are better off without their parents, and they know it. The challenge is to stay out of the way of the authorities for a year until Marnie turns 16 and will be legally able to take guardianship of her sister. Their nosy neighbor, Lennie, a homosexual whose partner has recently died, leaving him bereft and at loose ends, provides their only stability. But Lennie is curious about the whereabouts of their parents. As awful as he knows them to be, they can't really have abandoned their daughters for an extended vacation in Turkey, can they? That's what the girls tell him and anyone else who asks, until their secrets start to unravel. O'Donnell's finely drawn characters display the full palette of human flaws and potential. Told in the alternating voices of Marnie, Nelly, and Lennie, this beautifully written page-turner will have readers fretting about what will become of the girls. Copyright 2012 Booklist Reviews.

Marnie and Nellie have a problem: they buried their parents in the back garden after finding them dead. Ages 15 and 12, they are desperate to avoid being placed in foster care before Marnie turns 16, when she can live on her own under British law. Lennie, their next-door neighbor in the Glasgow, Scotland, housing estate, has noticed the girls are on their own. Old, lonely, and a great cook, Lennie takes them in and has his own reasons for not wanting to report them to the authorities. The three get along quite well until the girls' grandfather shows up. There are other complications as well, such as the issue of the money the girls' drug-dealing father has hidden, and Lennie's dog, who loves to dig in his neighbors' yard. VERDICT Quirky characters with distinct voices enliven this sometimes grim and often funny coming-of-age story in the vein of Karen Russell's best seller Swamplandia! 'Donnell's debut is sure to be a winner with adults and young adults alike.—Nancy H. Fontaine, Norwich P.L., VT

When 15-year-old Marnie Doyle finds her father's body on the sofa of their seedy Glasgow home and her mother hanging in the garden shed, she and her younger sister, Nelly, decide to bury them both in the back garden, in British screenwriter O'Donnell's debut novel. Fearing that social services will put them into foster care, the girls undertake a desperate charade; they claim that Gene and Isabel are off on a trip. Notorious druggies and neglectful parents, at first their purported abandonment seems plausible. That's what Lennie, the lonely gay man next door, believes; though an indecency arrest in the neighborhood park has branded him a "pervert," the girls accept his invitation to come under his wing, with food, shelter, and companionship. But his kindness can't erase the damage that's already been done: Nelly, a violin prodigy who was molested by her father, has nightmares and screaming fits. Though she gets straight As in school, Marnie starts selling drugs, drinking vodka daily, and having sex with a married man. The situation grows even darker when their sinister maternal grandfather, Robert MacDonald, insists on taking them in, which Lennie doesn't like. But his battle with Gramps becomes complicated when Lennie is diagnosed with—but doesn't disclose—a fatal illness. The sisters and Lennie narrate alternating chapters, moving the story along at a fast clip, but the author's decision to give precocious Nelly a prissy vocabulary and a stilted, poetic delivery ("A white syringe. The coarsest cotton. It's abominable") makes her a less believable character, especially as Marnie's voice is rife with expletives and vulgar slang. The difference between the sisters in terms of personality and maturity puts them at odds despite their shared fear of discovery. But their resilience suggests hope for their blighted lives. Agent: Alex Christofi, Corville and Walsh, U.K. (Feb.)

The girls in the gardenJewell, Lisa

The god of animalsKyle, Aryn