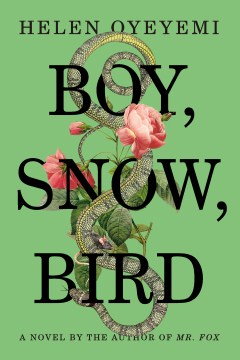 The author of Mr. Fox (2011) sets her whimsical retelling of a classic fairy tale in 1950s Massachusetts, where beautiful young Boy Novak has fled her tyrannical, abusive father to seek a fresh start. She makes two friends, glamorous Webster and ambitious Mia, and exchanges her lovelorn hometown suitor for a history teacher turned jewelry maker named Arturo Whitman, whom she marries despite not quite coming to love him. Arturo has a young daughter, Snow, who poses a threat to Boy after the birth of her own daughter, Bird, when a secret is revealed: the Whitman family has been passing for white since moving to Massachusetts from the South. Though Arturo's imperious mother, Olivia, wants Boy to send Bird away to live with Arturo's darker-skinned sister, Clara, it is Snow whom Boy exiles. As Bird grows up, she becomes fascinated with the stepsister she has been separated from, and the two begin a secret correspondence. Oyeyemi delves deeply into the nature of identity and the cost of denying it in this contemplative, layered novel. Copyright 2014 Booklist Reviews.

One of Granta's Best Young British Novelists, Oyeyemi here rethinks Snow White. Just don't expect anything like Kristen Stewart's The Huntsman. In winter 1953, a New York lass named Boy lands in small-town Massachusetts and marries a local widower with a lovely daughter named Snow Whitman. When Boy's own daughter, Bird, is born, she has dark skin, revealing that the Whitmans are African Americans passing as white. How will the family deal with mounting prejudice, and is Boy an evil stepmother? Big in-house excitement.

Somerset Maugham Award winner Oyeyemi reimagines Snow White in 1950s Massachusetts, where a woman must grapple with the revelation that her husband and stepdaughter are black Americans who can and do pass as white.

One of Granta's Best Young British Novelists, Oyeyemi (Mr. Fox; White Is for Witching) delivers an ingenious retelling of the Snow White fairy tale, full of the author's distinctive magical charm. Boy Novak, a young woman searching for the beauty missing in her life, leaves New York and arrives by chance in Flax Hill, MA, during the winter of 1953. She struggles to forget the ugliness of her past but creates a new life, marries a local widower, and becomes stepmother to his affable daughter, Snow Whitman. But the birth of her own daughter, Bird, who is dark-skinned, exposes the Whitmans' family secret—they are light-skinned African Americans passing for white. Boy never dreamt of becoming a wicked stepmother, but hints of the tale's aesthetic obsession begin to emerge as Boy, Snow, and Bird confront the cruelty of the mirror and question how much power appearances truly hold. VERDICT Oyeyemi, who has an eye for odd details, casts a spell with words and crafts a dreamlike world out of ordinary characters and circumstances in this intelligent and bewitching novel. [See Prepub Alert, 9/30/13.]—Lisa Block, Atlanta

The latest novel from Oyeyemi (Mr. Fox) is about a woman named Boy; her stepdaughter, Snow; and her daughter, Bird. Set in the 1950s Massachusetts, the novel is a retelling of the Snow White tale that plays on the concept of "fairest of them all," complete with mirrors as a recurring motif. The story begins with Boy's headlong escape from her abusive father in New York City. She washes up in a small New England town where she meets Arturo Whitman, a widower who becomes her husband. When their daughter, Bird, is born, she is noticeably "colored," though her half-sister, Snow (Arturo's daughter), appears not to be. Boy, who is white, discovers that her husband's family are African-Americans passing as white. Snow is sent away to be raised by an aunt, and the book's middle section is narrated by Bird, who is as whip smart, wry, and irresistible as Boy. Oyeyemi wields her words with economy and grace, and she rounds out her story with an inventive plot and memorable characters. (Mar.)

All the ever afters: the untold story of Cinderella's stepmotherTeller, Danielle

Gretel and the darkGranville, Eliza

We cast a shadowRuffin, Maurice Carlos