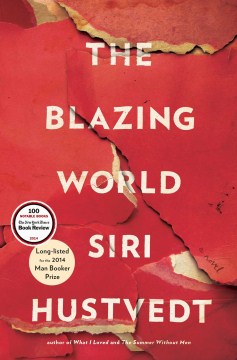 *Starred Review* Hustvedt's (Living, Thinking, Looking, 2012) fascination with art and artists, a prime subject in her fiction and essays, propels her sixth novel through a labyrinth of masquerade and betrayal to profoundly unsettling truths. I. V. Hess is the editor of this purported collection of writings by and about an enigmatic artist, Harriet Burden, the tall, strong, erudite widow of a famous and secretive art dealer. Long enraged over the dismissive response to her work, Harriet launches a high-stakes gambit to expose the art world's persistent sexism. She convinces three male artists to pose as the creators of a sequence of her elaborate, allusive, and wildly provocative installations. We observe Harriet, her intellectually astute and psychologically daring art, and her risky quest for validation and justice from multiple, often contradictory perspectives through entries from Harriet's journals, art reviews, and interviews with and written statements by various experts, including, oddly enough, a woman who reads auras, as well as Harriet's daughter and son, lifelong friend, lover, and artist-accomplices, trustworthy and vile. Hustvedt subtly explores the intricate workings of the brain and the mysteries of the mind as she shrewdly investigates gender differences, parodies art criticism, and contrasts diabolical ambition and the soul-scouring inquiries of expressive art. A heady, suspenseful, funny, and wrenching novel of creativity, identity, and longing. Copyright 2014 Booklist Reviews.

Always incisive and interesting, Hustvedt here tells the challenging story of artist Harriet Burden, who's tired of her low profile in the art world. So she presents her work under the guise of three different male artists, each with a blockbuster solo show. Once she reveals the subterfuge, she is challenged about the final show, presumably mounted by an artist named Rune with whom Harriet had a tense and combative relationship. And now Rune is dead.

Harriet Burden, known as Harry, is a lesser-known artist married to a prominent art dealer in New York City. After his death in 1995, she becomes more involved in artistic creation and philosophical performance art. She arranges for three male artists to give shows of her work under their names, looking to prove that women artists are not objectively considered in the world of modern art. Rune is the last artist Harry employs, and he reneges on their arrangement, claiming the works as his own, which leads to an extensive controversy of deadly consequence. Hustvedt illuminates the various forces at work in her heroine's life by presenting multiple viewpoints arranged in interviews, diary entries, family histories, prepared statements, and more, from the many people whose lives were related to and affected by the artist. VERDICT Intelligent and evidently knowledgeable about the world of modern art, theory, and philosophy, Hustvedt describes in detail the insular world of the New York City art scene. References to cultural exemplars from Hegel to Kierkegaard are included as footnotes and discussions among the characters, but the most meaningful connections for the reader are those between mothers and daughters. Despite the smart tone, the novel does not invest the matters at hand with a feeling of importance. [See Prepub Alert, 9/30/13.]—James Coan, SUNY at Oneonta Lib.

Art isn't easy, and according to Hustvedt (What I Loved), the art market can be especially rough on women who are over 40, overweight, and overtly intellectual, which is why the novel's protagonist, Harriet "Harry" Burden, a frustrated artist and art dealer's widow, exhibits her artwork using male stand-ins in a performance art experiment that goes terribly awry. Suffering from deep depression after her husband's death, followed by extreme elation, Harry relocates to Brooklyn, where she produces modern masterpieces dotted with clues to her identity, then shows them under a male collaborator's name. Her first mask, a minor artist, chafes at the role, but the second, biracial gay Phineas Q. Eldridge, proves more amenable, while the third—the meanest and most dangerous—enjoys the limelight so much he denies Harry's claims to authorship. Larger-than-life Harry reads vociferously, loves fervently, and overflows with intellectual and creative energy. Structurally, her Pygmalion-turned-Frankenstein tale is recounted through a variety of narrators, including an art critic; a New Age art groupie; Harry's children, friends, and detractors; and Harry herself. Hustvedt dissects the art world with ironic insight. Footnotes and academic references, a large cast of characters, a wide range of narrative voices, intellectual digressions, and occasional one-liners enrich this novel of the New York art scene. This is a funny, sad, thought-provoking, and touching portrait of a woman who is blazing with postfeminist fury and propelled by artistic audacity. Agent: Amanda Urban, ICM. (Mar.)