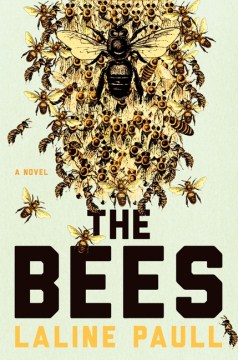 Imagine a story similar to Margaret Atwood's A Handmaid's Tale but told from the perspective of an insect. That's exactly the premise of Paull's debut novel. Flora 717, a lowly sanitation bee, is born with unusual features and abilities that allow her to move fluidly between the strict hierarchies of her hive. Through this ability, she witnesses the brutality and beauty that the various castes of bees exhibit to keep the hive productive, all in service and loyalty to the queen. But when Flora discovers she is fertile and can produce an offspring, she must betray her instincts to worship the queen bee and follow an untrodden path that leads her away from her kin. Paull's plot brings to mind films like the 1998 hit Antz, but her deft storytelling and her nod to scientific literature allow the story to avoid the cutesy trappings that sometimes characterize novels featuring nonhuman characters. A surprisingly compelling tale. Copyright 2014 Booklist Reviews.

"Accept, Obey, and Serve." This is the first commandment within the hive. Flora 717 is a sanitation bee, the lowest of all the castes. Yet from the moment she emerges from her cell into a community where variance is destroyed, Flora shows herself different. As her uniqueness proves useful in a time when the hive is at risk, Flora finds herself feeding newborns in the royal nursery, then foraging alone beyond the hive to bring back pollen, and even meeting the Queen, who shows Flora the beauty and sadness that exists in the bees' past and present. Each new job brings Flora more joy, and more questions, for while she knows that obedience and sacrifice are instinctive within the hive mind, her individual traits bring her under the purview of the high priestesses and fertility police, who are striving to maintain the strict hierarchy of their society. When Flora breaks the ultimate law of the hive, challenging the Queen's role as mother to all, her desire to protect her egg will lead the hive toward a future none expected. VERDICT Paull's debut presents the intricate world of the honeybee hive, where devotion and service are sacred, and caste, politics, and power are as present as in any human royal court. A powerful story reminiscent of Margaret Atwood's The Handmaid's Tale, in which one original and independent thinker can change the course of a whole society. [See Prepub Alert, 11/22/13; an "Editors' Spring Pick," LJ 2/15/14.]—Kristi Chadwick, Massachusetts Lib. Syst., South Deerfield

Dystopia meets the Discovery Channel in this audacious debut novel. Flora 717, a bee born to the lowest social strata at the orchard hive, is different than her kin. Her uncommon earnestness and skill lead her to various jobs—from child rearing to food gathering—and earn her the respect and admiration of her peers. But Flora's advances also expose her to the hive's questionable social order and attract negative attention from the elite group of bees closest to the queen. Like Animal Farm for the Hunger Games generation, Paull's book features characters who are both anthropomorphized and not—insects scientifically programmed to "Accept, Obey and Serve," but who also find themselves capable of questioning that programming. The result is at times comic—picture bees having an argument—but made less so by the all-too-real violent stakes involved in maintaining beehive status quo (sacrifices, massacres, the tearing of bee heads from bee bodies). Dystopian fiction so often highlights the human capacity for authoritarianism, but Paull investigates bees' reliance on it: what is a hivemind, after all, if not evolutionarily beneficial thought control? And while Flora 717 may not be the next Katniss Everdeen, she symbolizes the power that knowledge has to engender change, even in nature. (May)

Empire in black and goldTchaikovsky, Adrian, 1972-

Empire of the antsWerber, Bernard