The ghost of Hannah Mendes : a novel / Naomi Ragen. 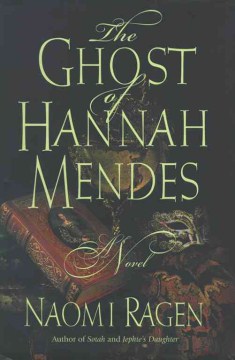 Ragen's engrossing novel depicts one family's search for their Sephardic Jewish roots. When Catherine de Costa finds out that she is dying, she feels as though she has nothing to show for her life. Her family is a disappointment: her daughter's current husband is a Gentile, and her granddaughters, Suzanne and Francesca, show no interest in their legacy. While contemplating how to divide her numerous assets, Catherine is visited by the ghost of ancestor Hannah Mendes (an actual historical figure), who tells her to send her granddaughters to search for Hannah's missing medieval manuscript. Each of the girls handles the search in her own way--Suzanne goes off with a man, and Francesca methodically follows every clue--but they do manage to end the journey together. As Ragen presents her fictionalized version of Mendes' extraordinary life, she captures the terror of the Spanish Inquisition. By weaving together the past and the present, the true and the fanciful, she also shows how much a family's history affects its future. ((Reviewed August 1998)) Copyright 2000 Booklist Reviews

Suzanna and Francesca Abraham have never cared much about their Jewish heritage. But when their grandmother, Catherine da Costa, matriarch of an old Sephardic family, learns she is dying, she sets into motion a plan to bring her granddaughters back to their faith. Her scheme involves the lost pages of an ancient manuscript detailing the story of her family's exile from Spain during the Inquisition, including their false conversion to Christianity. The quest for the missing pages takes the sisters to Europe, where they meet the young men who will teach them about their roots and traditions and about love. The story told in the manuscript is brought to life by spirits and ghosts, especially that of Hannah Mendes, a real historical figure. Ragen (The Sacrifice of Tamar, LJ 9/15/94) beautifully articulates what Jews must do to survive in every generation. Highly recommended, especially for Jewish readers. Barbara Maslekoff, Ohioana Lib., Columbus, OH Copyright 1998 Library Journal Reviews

Each of Ragen's previous novels Jephte's Daughter, Sotah and The Sacrifice of Tamar focused on a family story within an insular orthodox Jewish community. Here, Ragen weaves an account of a contemporary, thoroughly assimilated New York Jewish family into that of their renowned Sephardic ancestor Hannah Mendes a true historical personage who lived in Portugal during the 16th century. Through both sets of characters, Ragen examines questions of faith, responsibility and the urgent desire to ensure the continuation of a family line. Both current and historical narratives include tales of passion and romance, but the medieval tale is more literary and engaging. When, in the present, elderly, wealthy Catherine de Costa learns that she is dying, she wants to make sure that her 20-something granddaughters, Suzanne and Francesca, connect meaningfully with their heritage. Catherine manipulates them into searching for long-lost portions of Hannah's memoirs and sends them off to Europe where, as manuscript pages turn up, their ancestor's story begins to come alive. The memoirs include well-researched descriptions of the Spanish Inquisition as well as secret rituals practiced by medieval Jews who had been forced to convert to Christianity. As though fated, each sister meets an appropriate man, one a doctor, the other a professional manuscript hunter. Suspense rises as they each experience dreamlike visitations from Hannah that lead them to self-fulfillment and the embrace of their heritage. Although the plot is somewhat predictable, Ragan's forte is her ability to forge a connection between past and present, while the book adroitly addresses issues of faith and family. (Sept.) Copyright 1998 Publishers Weekly Reviews

The genizah at the house of ShepherYellin, Tamar

The debt of TamarDweck, Nicole

The beauty queen of JerusalemYishai-Levi, Sarit

The elixir of immortalityGleichmann, Gabi

The last Kabbalist of LisbonZimler, Richard