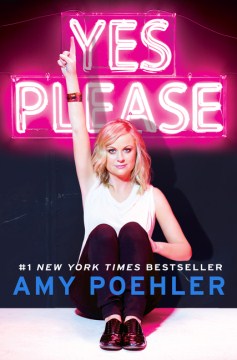 *Starred Review* This book is heavy. Literally heavy, as in surprisingly hard to carry around. Perhaps that's because it's so firmly packed with wit and insight. And all that insight makes it figuratively heavy as well, though you might not notice because of all the wit. Fans of Poehler and her offbeat characters expect her to be outrageous (I'm looking at you, Amber, one-legged, gassy reality star), and there's some of that here, but mostly this is a sweet, funny memoir and a thoughtful look at what it takes to be a woman, a woman in comedy, a divorced woman with children, and, peering into the future, a 90-year-old woman who has plenty of advice to offer middle-aged Amy. In fact, there's lots of advice given here, and it's smart, the kind of stuff your favorite aunt would tell you, albeit, an aunt who once shot a moose on the "Weekend Update" set while rapping alongside Sarah Palin. She addresses how to treat your career (like a bad boyfriend); how not to torture other women about their life choices; ways to shut people up about your newly single status ("Hey, lady, I don't want to fuck your husband"). With so much to enjoy and absorb, you may even want to carry this book around, reread it, and underline pertinent-to-your-own-life sentences, which would be perfectly reasonable, except for the fact that it's so darn heavy. Copyright 2014 Booklist Reviews.

The beloved Poehler isn't just a funny performer; she's a funny writer, having produced her own material since her 1990s career launch. Now she's offering her first book, whose acquisition caused a storm of interest. With a 500,000-copy first printing.

At one point in Poehler's first book, she pauses in the middle of a story about how enraged she was when someone dropped a script in her lap while she was sleeping on an Amtrak train and writes, "See? I am not as nice as you think I am." The strongest parts of this memoir are along similar lines, when the comedienne discusses instances of everyday sexism and general disre-spect she's experienced and describes ways she's learned to assert herself that other women could deploy for themselves. She spends a lot of time writing about how hard writing is, which becomes a bit wearing. The chapter about Parks and Recreation with footnotes from show crea-tor Mike Schur stands out as both informative and funny, but a section toward the end about a trip to visit orphans in Haiti is tonally different from the rest of the book and seems tacked on. VERDICT These quibbles aside, the book is well worth reading for Poehler's fans and anyone who enjoyed Tina Fey's Bossypants or Mindy Kaling's Is Everyone Hanging Out Without Me?—Stephanie Klose, Library Journal (c) Copyright 2014. Library Journals LLC, a wholly owned subsidiary of Media Source, Inc. No redistribution permitted.

Poehler, the sharp and self-deprecating Emmy-winning star of TV's Parks and Recreation, takes a stab here at autobiography mixed with advice on sex, babies, and even divorce. She mines her 20s, back in the 1990s, when she cut her teeth in theater at ImprovOlympic in Chicago, and with the Upright Citizens Brigade in New York. Poehler struggled for many years in part-time gigs—including doing bits on Late Night with Conan O'Brien—and her humility and good work ethic shine through: for example, in the chapter "Don't Forget to Tip Your Waitress" (which was excerpted last year in the New Yorker), she recounts rather poignantly her various early jobs, such as working as a junior secretary in a podiatrist's office at age 16 and doing waitressing stints in Chicago and New York. Poehler gives ample credit to current and former colleagues, such as Matt Besser of UCB, Seth Meyers at SNL, and the cast of Parks and Recreation; elsewhere she offers some wonderful advice on apologies—both receiving and giving. Her memoir is as bewitching and chameleonlike as Poehler herself is when she appears onstage and on-screen. (Oct.)

I don't know what you know me from: confessions of a co-starGreer, Judy, 1975-

I feel bad about my neck: and other thoughts on being a womanEphron, Nora

Paddle your own canoe: one man's principles for delicious livingOfferman, Nick, 1970-

This time together: laughter and reflectionBurnett, Carol