First they killed my father : a daughter of Cambodia remembers / Loung Ung. 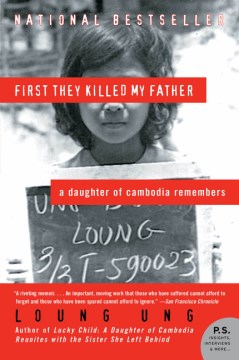 /*Starred Review*/ Ung was only five when the Khmer Rouge began their murderous siege of Cambodia in 1975. By its end in 1979, approximately two million Cambodians had died from torture, execution, or starvation. Ung begins her narration as the family was sent into exile, vividly describing their struggle for survival in a world gone mad. Only half of her family will survive. Few families were left whole when the campaign was over. What sets Ung apart is that her childlike innocence, so evident early in her story, gives way to a crude but certain instinct for survival. As a child laborer in a garden she witnesses the daily burials of whole families. "I see them dig a hole underneath the hut of the dead family. . . . There were times when such scenes terrified me, but I have seen the ritual performed so many times that I feel nothing." At one point, she looks hopefully at a beautiful sunset. "Maybe there are gods living up there after all. When are they going to come down and bring peace to our land?" But then her father is taken away, never to be seen again. Unlike other major horrors of this century, there has been little literature from the Cambodian tragedy. Perhaps Ung's memoir should serve as a reminder that some history is best not left just to historians but to those left standing when the terror ends. (See also Chandler, p.741.) ((Reviewed December 15, 1999)) Copyright 2000 Booklist Reviews

In this "Age of Holocaust," Ung's memoir of her childhood in Pol Pot's Cambodia offers a haunting parallel to the writings of Anne Frank in the Europe of Adolf Hitler. A precocious, sparkling youngster, Ung was driven from Phnom Penh in April 1975 to relatives in the countryside, then to Khmer Rouge work camps. Here she recalls her fear, hunger, emotional pain, and loneliness as her parents and a sister were murdered and another sister died from disease. By the 1979 freeing of Cambodia by Vietnamese troops, she was a hardened, vengeful nine year old. Although written nearly 20 years later, this painful narrative retains an undeniable sense of immediacy. The childlike memories are adroitly placed in a greater context through older family members' descriptions of the political and social milieu. Recommended for public and academic libraries. [Previewed in Prepub Alert, LJ 9/15/99.]--John F. Riddick, Central Michigan Univ. Lib., Mt. Pleasant Copyright 2000 Cahners Business Information.

In 1975, Ung, now the national spokesperson for the Campaign for a Landmine-Free World, was the five-year-old child of a large, affluent family living in Phnom Penh, the cosmopolitan Cambodian capital. As extraordinarily well-educated Chinese-Cambodians, with the father a government agent, her family was in great danger when the Khmer Rouge took over the country and throughout Pol Pot's barbaric regime. Her parents' strength and her father's knowledge of Khmer Rouge ideology enabled the family to survive together for a while, posing as illiterate peasants, moving first between villages, and then from one work camp to another. The father was honest with the children, explaining dangers and how to avoid them, and this, along with clear sight, intelligence and the pragmatism of a young child, helped Ung to survive the war. Her restrained, unsentimental account of the four years she spent surviving the regime before escaping with a brother to Thailand and eventually the United States is astonishing not just because of the tragedies, but also because of the immense love for her family that Ung holds onto, no matter how she is brutalized. She describes the physical devastation she is surrounded by but always returns to her memories and hopes for those she loves. Her joyful memories of life in Phnom Penh are close even as she is being trained as a child soldier, and as, one after another, both parents and two of her six siblings are murdered in the camps. Skillfully constructed, this account also stands as an eyewitness history of the period, because as a child Ung was so aware of her surroundings, and because as an adult writer she adds details to clarify the family's moves and separations. Twenty-five years after the rise of the Khmer Rouge, this powerful account is a triumph. 8 pages b&w photos. (Feb.) Copyright 2000 Cahners Business Information.

"Thus began/ my Erotikon thus, my book of books, round-robin encyclical,/ round-the-head and round-the-corner, memorabilia/ of mobs and rabble, corraling coral with carols...." Mitchell's first collection since 1992's NBA finalist Rapture fuses eros and iconic lyric imagery into an alloy of poetic excess. With copious allusions (and copious notes) to such books as Frazer's The Golden Bough, Mitchell makes labored use of textual fragments, whether weaving a seven-part poem in seven seven-line stanzas ("Bird: A Memoir") or collaging her title poem into "a grand slam of sound." Many of the poems seem heavy with undigested Jorie Graham-like notions and movements, particularly those that point to their own well-worn methodology as if it were the first wheel: "It's not a question/ of what's true or not true, it's more/ a matter of what I want to hear." The speaker asks to be spared "the long slow walk of recitative" in favor of more operatic gestures, "the way notes// cluster in a difficult passage, the dotted/ sixteenths sugaring off, almost cloying, the ink/ crossed and recrossed, written/ over." Indeed, desire is equated with speed, "striding toward faster and faster tempos" as the images within poem after poem collide with one another like a sort of blenderized National Arts Club. Some will find Mitchell's diction thrillingly decadent, while others will find the over-the-top alliteration, stock high-art figures and mannered frisson tiresome. (Feb.) Copyright 1999 Cahners Business Information.

When broken glass floats: growing up under the Khmer Rouge, a memoirHim, Chanrithy, 1965-

Left to tell: discovering God amidst the Rwandan holocaustIlibagiza, Immaculee

Never fall down: a boy soldier's story of survivalMcCormick, Patricia, 1956-

Red scarf girl: a memoir of the Cultural RevolutionJiang, Ji-li

A long way gone: memoirs of a boy soldierBeah, Ishmael, 1980-

The girl who smiled beads: a story of war and what comes afterWamariya, Clemantine