The Bookseller : A Novel / Cynthia Swanson. 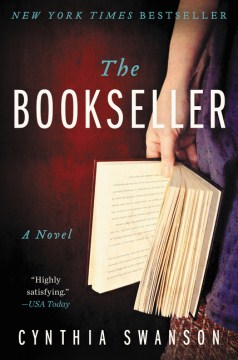 By day, Kitty Miller is a cat-loving, free-spirited single woman who co-owns downtown Denver's Sisters Bookstore with her best friend, Frieda. By night, Kitty enters a dream world in which she is known as Katharyn Andersson, wife of Lars, mother of triplets Missy, Mitch, and the autistic Michael. It's a sleek, 1960s suburban life, filled with maids and nannies, Cadillacs and cocktail parties, in which people tiptoe gently around her, obliquely referring to the hard times she's recently suffered. Kitty's not too concerned about these condolences because this is only a dream, right? When she wakes up, she'll go back to her bookstore and best friend and eagerly await her parents' return from their exotic anniversary trip to Honolulu. But as Kitty finds her daily life increasingly influenced by events and people from her dream world, it becomes harder to know just what is real and what is imagined. Dexterously traversing past and present, fact and fiction, Swanson's clever first novel ingeniously explores the inventive ways the human spirit copes with trauma. Copyright 2014 Booklist Reviews.

By day, Kitty Miller enjoys her carefree single life in 1962 Denver, where she runs a bookstore with a friend. But by night, she dreams it's 1963, and she's happily married, with a home, children, and an active social life. It's everything she wanted, and, confusingly, the dreams are starting to seem more and more real. With rights sales to nine countries, Pushcart Prize nominee Swanson's dreams seem to be coming true, too.

With her freshly painted sunny yellow bedroom in 1962 Denver, Kitty Miller leads a content if solitary life. Running a bookshop with her best friend, Frieda, is a welcome break from teaching school. Everything about Kitty's life seems benignly commonplace until she begins waking up in another bedroom, in another life: a life in which she is another version of herself. She wakes up as Katharyn Andersson in 1963 Denver, married to Lars, a man who had answered a personal ad 1962 Kitty Miller had placed—but 1962 Lars never showed up for their date. Katharyn and Lars have three children and move in a sphere Kitty doesn't know about. As Kitty investigates the two worlds of Katharyn and Kitty, she sees parallels and choices, trade-offs and sacrifices. VERDICT This is a stunner of a debut novel, astonishingly tight and fast paced. The 1960s tone is elegant and even, and Kitty/Katharyn's journey is intriguing, redolent with issues of family, independence, friendship, and free will. This will especially resonate with fans of the movie Sliding Doors and the authors Anna Quindlen and Anita Shreve. [See Prepub Alert, 9/15/14.]—Julie Kane, Sweet Briar Coll. Lib., VA

In 1962, Kitty wakes in Katharyn's bed next to Katharyn's husband, Lars. Down the hall are Katharyn's children: Missy, Mitch, and Michael. In the mirror, Katharyn's reflection looks exactly like Kitty's, and Kitty is able to recall specific memories and behaviors of Katharyn's with disturbing accuracy. But Kitty and Katharyn are not the same—Katharyn is just the woman Kitty becomes in her dreams. In reality, Kitty is single, childless, and owns a floundering bookstore with her best friend, Frieda. She has pursuits and interests that Katharyn's life has no room for. Initially believing that Katharyn is a figment of her imagination, a pleasant dream showing what married life could have been like, Kitty identifies the one moment that prevented her life from becoming Katharyn's. Kitty's uncertainty about which woman's reality is real consumes her. Swanson masterfully crafts both Kitty's and Katharyn's worlds, leaving open the question of which of them is real until the final pages. Swanson's evocative novel freshly considers the timeless question, "What if?" (Mar.)

Maybe in another lifeReid, Taylor Jenkins

The book that matters mostHood, Ann, 1956-
Recipe for a perfect wifeBrown, Karma

Paris by the bookCallanan, Liam