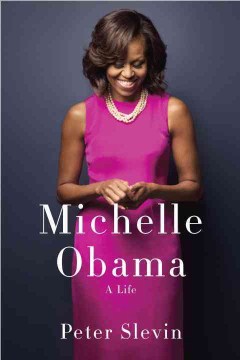 *Starred Review* A descendant of slaves, Michelle Obama has a lineage and a life history most unlikely for a First Lady. Born and raised on the South Side of Chicago in a working-class black family, she has lived her life against the backdrop of major developments in black America. When she became First Lady in 2008, she changed the trajectory of American history. Journalist Slevin explores Michelle's family history and struggle to rise above racial limitations, her marriage, and her close friendships. He details the unerringly strong, well-balanced sense of self she has taken with her from Chicago to Princeton to Harvard Law School to corporate America and eventually to the White House. In her undergraduate thesis on straddling the racial and economic divides, Michelle explored themes that continued to challenge her and her husband as they advanced in their careers and even as the nation's first family. Slevin chronicles Michelle's evolution from very reluctant candidate's wife to engaging First Lady and protective first mother. She has focused on supporting military families, encouraging better nutrition and exercise for youth, and urging urban youth, in particular, to get an education. Like all First Ladies, she has sparked affection, criticism, and controversy, often with a racial tinge aimed directly at the first African American First Lady. HIGH-DEMAND BACKSTORY: Written by a well-respected veteran reporter, this comprehensive biography of the first African American First Lady is bound to attract interest well beyond the book review page. Copyright 2014 Booklist Reviews.

Veteran reporter Slevin, who at the Washington Post covered political campaigns and the rise of Barack Obama, turns to First Lady Michelle Obama. With a 75,000-copy first printing.

Perhaps no first lady since Jacqueline Kennedy sought the White House more reluctantly than Michelle Obama (b. 1964). By the time Barack Obama announced his intention to run for office, Michelle had already scaled back her career goals and settled for less-demanding responsibilities and more time to run her family's household, while her husband served in the Illinois State Senate and the U.S. Senate. Slevin's (journalism, Northwestern Univ.; national political correspondent, Washington Post) thorough coverage of the first lady's life to the midterm of Barack's presidency provides deep understanding of her climb from Southside Chicago to the universities of Princeton and Harvard, all the while searching for her place in a world that she mistrusted. Slevin wants readers to know that Michelle was driven to succeed and to be recognized for her own talents and abilities. He shows that the programs she endorses as first lady reflect the skills she brings to the White House as a former university and hospital administrator whose job it was to extend those institutions into the surrounding minority communities. Although the author cites interviews with his subject's mother and brother, his account relies mainly on news and secondary sources. VERDICT Readers should develop an appreciation for Michelle Obama, the challenges she overcame, and her well-deserved accomplishments. Those who would like to know more about the first lady, her family, and lifelong and recent friends who have helped her along the way will enjoy the author's engaging and authoritative writing. [See Prepub Alert, 11/17/14.]—Jill Ortner, SUNY Buffalo Libs.

Political journalist Slevin offers an informative if not particularly personal portrait of America's first lady in this thoroughly researched biography. Slevin meticulously recounts Obama's inspiring journey, beginning with the struggle of her parents, Marian and Fraser Robinson, to eke out better lives on Chicago's South Side, and continuing through her childhood to her experiences at Princeton and Harvard Law School, a job at white-shoe law firm Chadwell Kaiser (where a charismatic law student named Barack Obama first made her acquaintance), and her residence in the White House. Providing valuable insight into the trajectory of her life and career, Slevin shows how Obama draws strength from her upbringing, which emphasized knowledge, family, and social responsibility. The rare glimpses of the personality hidden behind Obama's cool and unruffled demeanor are the most satisfying moments of the narrative, but they are few and far between, leaving her almost as enigmatic a figure at the book's close as she is at the beginning. (Apr.)

The matriarch: Barbara Bush and the making of an American dynastyPage, Susan, 1951-

Crisis of character: a White House Secret Service officer discloses his firsthand experience with Hillary, Bill, and how they operateByrne, Gary J.

The truth about Hillary: what she knew, when she knew it, and how far she'll go to become presidentKlein, Edward, 1936-

Who thought this was a good idea?: and other questions you should have answers to when you work in the White HouseMastromonaco, Alyssa

Laura Bush: an intimate portrait of the first ladyKessler, Ronald, 1943-

A woman in charge: the life of Hillary Rodham ClintonBernstein, Carl, 1944-