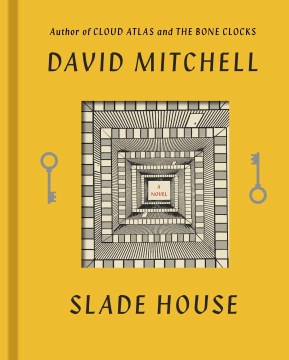 In this slim and compelling novel, literary-fiction stalwart Mitchell offers his most accessible book yet—a haunted-house story in the vein of such classics as The Turn of the Screw and The Haunting of Hill House. Written as five distinct chapters, each set on the last Saturday in October, spaced nine years apart, the novel follows the nefarious exploits of the Grayer twins, who inhabit the eponymous home, hidden in a narrow alley behind a pub. Each chapter is told through the point of view of the poor soul who has been unknowingly summoned to the home as a sacrifice to the twins. Readers will appreciate how, over the 36-year span, characters and story threads overlap to craft a unified psychological tale. Mitchell gives readers the same genre-blending, intricate plotting, and thought-provoking story lines as he does in his more ambitious works (The Bone Clocks, 2014), but here his scope is smaller and his focus limited mainly to producing the intensely unsettling tone. Suggest to fans of Audrey Niffenegger, Karen Russell, and Steven Millhauser, and expect it to be read as a Halloween staple for years to come.HIGH-DEMAND BACKSTORY: Expect this superb haunted-house tale to draw less critical acclaim, but perhaps a broader cross section of readers, than Mitchell's early, more demanding novels. Copyright 2014 Booklist Reviews.

Fans of Mitchell's The Bone Clocks and Cloud Atlas will recognize the interlocking narrative structure and literary-fantastical bent of this new work, featuring a house set behind a black metal door lacking keyhole or knob and found at the end of a nondescript alley. People who walk through that door—including the five characters here, their narratives separated by intervals of nine years from 1979 to 2015—are never seen again. Pitched as his most accessible book yet, but, really, who doesn't want to just drink up all of Mitchell's writing?

It would have been better if Nathan Bishop and his mother, Rita, had never found the house off Slade Alley, where Rita had been invited to perform piano for some distinguished guests, including Yehudi Menuhin. They might have missed it altogether had it not been for a helpful passerby directing them to the small iron door through which they found the impressive home of Lady Grayer. After that October in 1979, mother and son were never seen again. Following a lead to their disappearance nine years later, Det. Gordon Edmonds entered through the same improbable door in the wall, met and interviewed the attractive owner, and was also never seen again. Since that time, every nine years on the last Saturday in October, another disappearance occurs. Behind these mysteries are Jonah and Norah Grayer, telepathic twins who seek to achieve immortality through the souls of the recently disappeared. VERDICT In Mitchell's (The Bone Clocks) assured hands, this unsettling supernatural tale is deliciously inventive and hard to put down. [See Prepub Alert, 4/16/15.]—Barbara Love, formerly with Kingston Frontenac P.L., Ont.

Mitchell's latest novel is his shortest and lightest to date, and it functions as a sort of entry-level offering from the author of hugely ambitious novels such as Cloud Atlas and The Bone Clocks. Unfortunately, it gives Mitchell's fans far too little of a good thing. Tucked into an alley behind a British dive bar is the sprawling and mysterious Slade House, inhabited by the soul-eating, shape-shifting Grayer Twins. In episodes that begin in 1979 and end in the present, they lure a succession of human hosts into their Wonderland-like abode. First there's a geeky teen and his mother, then a hard-boiled detective and a crew of New Wave ghost hunters, followed by a backstory-heavy section framed as an interview with an expert on the case. All will eventually enter the mind-bending architecture of Slade House and engage in psychic warfare with its denizens. There is a solid haunted-house book in here somewhere, but it's wedged intermittently into a surfeit of quirk, repetition, and esoteric dialogue that's very hard to take seriously without a more solid foundation. It all builds up to the requisite wizard duel between the Twins and the formidable Iris Marinus-Levy, who will be familiar to readers of The Bone Clocks. The high degree of self-reference—and the skipping through genre and time—is trademark Mitchell, but the constant rehashing of what is already a pretty thin plot means that this offering fails to really stand up on its own, or to add anything new to the Mitchell-verse. (Nov.)

White is for witchingOyeyemi, Helen

The shadow of the windRuiz Zafon, Carlos, 1964-