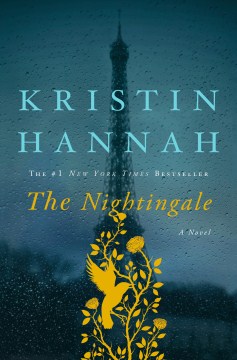 *Starred Review* Hannah (Fly Away, 2013) departs from the contemporary novels she's known for with this engrossing tale of two sisters' bravery in occupied France during WWII. Viann and Isabelle Rossignol took very different paths after their mother's death devastated their family and war turned their father into a distant and withdrawn parent. Older sister Viann sought comfort in the arms of a schoolmate, getting pregnant and marrying at just 16. Rebellious Isabelle gets herself kicked out of multiple boarding schools. Then the Germans conquer France, and the sisters' lives change drastically. When her husband is captured and detained as a prisoner of war in Germany, Viann is forced to take in a German captain. Soon she finds herself relying on him to ensure there is food on the table for her daughter. Isabelle joins the Resistance, boldly leading fallen airmen fighting for the liberation of France over the mountains to Spain to safety. Hannah's latest is a page-turner that will no doubt have readers reaching for tissues. This moving, emotional tribute to the brave women who fought behind enemy lines during the war is bound to gain the already immensely popular Hannah an even wider audience.HIGH-DEMAND BACKSTORY: With a 350,000 initial print run and a multiplatform promotional campaign, best-selling Hannah's new novel is positioned to take the book world by storm. Copyright 2014 Booklist Reviews.

Recently, leading authors from Anthony Doerr (All the Light We Cannot See) to Kate Mosse (Citadel) have set their novels in World War II France. Now it's mega-best-selling Hannah's turn. In this tale of two sisters, bolder Isabelle enjoys her life in Paris, while older Viann lives peacefully in the country with husband Antoine. Their bond is tested when war comes and their father sends Isabelle to help Viann as Antoine marches off to battle. A one-day laydown, a ten-city tour, and more.

Character growth and development is a strength of this World War II-set novel, although the middle plods during some sections. Sisters Vianne and Isabelle Mauriac are driven apart by unhealed childhood wounds and clashing personalities. When Isabelle is kicked out of boarding school for the umpteenth time for "rebellious" behavior, her embittered veteran father, in the midst of drowning his own battle scars in bourbon, sends the adolescent to her elder sister's house. Meanwhile, Vianne attempts to find salvation from her past by marrying her teenage sweetheart and relocating to the French countryside where she delights in her garden and her school-age daughter. As Hitler's forces invade, both sisters face challenging choices that will show where their loyalties lie. VERDICT Hannah (Summer Island; Firefly Lane) has long been a staple of women's fiction. Readers who enjoy stories with ethical dilemmas and character-driven narratives will enjoy this novel full of emotion and heart. [See Prepub Alert, 8/11/14.]—Julia M. Reffner, Midlothian, VA

"In love we find out who we want to be; in war we find out who we are," Hannah's narrator, Viann Mauriac, proclaims as she looks back on her life in France. The bestselling author hits her stride in this page-turning tale about two sisters, one in the French countryside, the other in Paris, who show remarkable courage in the German occupation during WWII. Through Viann we learn how life was disrupted when husbands and fathers were forced to enlist while the Germans took over their towns and villages, billeting themselves in people's homes, gorging on food, and forcing the starved locals to wait in endless lines for rations. Viann's younger sister, Isabelle, always rebellious, joins the resistance in Paris, finds love with another resistance fighter, and risks her life guiding downed British and American paratroopers over the Pyrenees and out of France. Viann does her part too, saving 19 Jewish children by hiding them in a convent. Despite having a German officer in her own home, she also takes in a Jewish baby—her best friend's son—when his mother is sent to a concentration camp. The author ably depicts war's horrors through the eyes of these two women, whose strength of character shines through no matter their differences. Announced first printing of 350,000 copies.(Feb.)

The world that we knewHoffman, Alice

Before we were yoursWingate, Lisa

The words I never wroteThynne, Jane

The room on Rue AmelieHarmel, Kristin