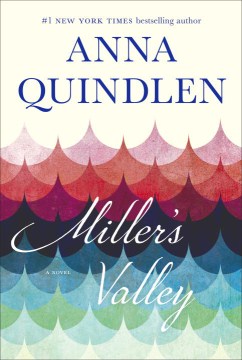 Growing up in the valley that bears her family name, Mimi Miller learned early on that there is a dance of determination and delicacy in the best and worst of relationships. The one between her mother and aunt was fraught with recriminations, yet sustained by loyalty. The one between her brother, Tommy, and the world at large went from open and trusting to closed and criminal after his stint in Vietnam. The friendships Mimi herself had with childhood pal Donald and teenage love Steven went from love to lust and back again. But perhaps no connection was more important than that of the Miller family to the land that had been theirs for generations, as it came under threat of annihilation by a government-mandated flooding project. As she matures from precocious youngster to purposeful young woman, Mimi comes to terms with life as it should be versus life as it is. This is vintage Quindlen (Still Life with Bread Crumbs, 2014), a compelling family tale rich in recognizable characters, resplendent storytelling, and reflective observations. It is also an affectionate and appreciative portrait of a disappearing way of life. HIGH-DEMAND BACKSTORY: Best-selling author and popular columnist Quindlen is a go-to novelist for popular fiction fans; an all-fronts promotional campaign will marshal enthusiastic interest. Copyright 2014 Booklist Reviews.

Personal in an astute kind of way, whether she's writing Pulitzer Prize-winning commentary or No. 1 New York Times best-selling fiction and nonfiction, Quindlen seems like just the author to write a novel tracing the arc of one woman's life from her teenage years in the roiling Sixties through love, marriage, work, and family until today. Mimi Miller starts out in the fictional town of Miller's Valley, close by the Pocono Mountains in eastern Pennsylvania, and who knows where she will end.

In the 1960s, the residents of Miller's Valley, a small Pennsylvania town that has seen more than its share of flooding, are being pressured by government officials to accept eminent domain, move out, and watch their town fill with water for a fancy new recreation area. Mimi Miller is a bright, independent teenager with a gift for science who's read the geologists' reports and understands the dark lies hidden beneath the promises of modern living. Her fracturing, strong-minded family is torn. Brother Tom, once a likable high school troublemaker, has returned from Vietnam a ruined man. Her Aunt Ruth, trapped by her own secrets, hasn't left the small house on the Miller property for years. Mimi's parents are divided; her nurse mother accepts the inevitable, while her farmer father can't imagine life anywhere else. Yet it's Mimi who holds them all together at no small cost to her own future. VERDICT In this crisply told story of progress, loss, love, deception, loyalty, and grace, the Pulitzer Prize-winning Quindlen once again captures her readers' attention from first page to last. [See Prepub Alert, 10/12/15.]—Beth Andersen, formerly with Ann Arbor Dist. Lib., MI

Quindlen's latest novel, following Still Life with Breadcrumbs, is a moving exploration of family and notions of home. Mimi Miller recounts her life beginning in the 1960s in Miller's Valley, a small Pennsylvania town where her family has been firmly rooted for generations. Government officials warn that a flood could drown the family farm, and Mimi observes her community's reactions while trying to reconcile her own ambitions with her loyalty to home. Her father refuses to relocate, and seeing his stubbornness, Mimi begins to understand her mother's own unrealized dreams. She also wonders about her reclusive aunt, who lives in a small house on their property and never ventures outside. She watches as her brother, Tommy, tries to escape a feeling of stagnancy by enlisting in the military, only to find himself more trapped than before. Meanwhile, she forges her own escapes into school, romance, and sex. Though the pacing is somewhat uneven, Quindlen's prose is crisp and her insights resonant. This coming-of-age story is driven as much by the fully realized characters as it is by the astute ideas about progress and place. (Apr.)

The patience of riversFreda, Joseph, 1951-

The secret wisdom of the earthScotton, Chris

Our souls at nightHaruf, Kent

The stars are fireShreve, Anita