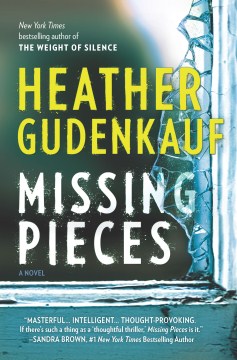 In Gudenkauf's latest domestic suspense novel (following Little Mercies, 2014), a woman learns that her husband is not who he says he is. When the aunt who raised him suffers a serious fall, Jack Quinlan and his wife, Sarah, head back to Jack's hometown of Penny Gate, Iowa. They are surprised to learn that the sheriff suspects foul play. Even more surprising is the fact that this isn't the first act of violence to hit Jack's family. He had told Sarah that his parents had been killed in a car accident, but, in reality, his mother was murdered and his father disappeared, suggesting his guilt. When Jack's aunt is poisoned in her hospital room, Jack and his younger sister are suspects in another family tragedy. Is it possible that a man who lied about his parents' deaths for 20 years could be lying about his innocence in this crime, too? This fast-paced read will appeal to fans of psychological suspense like that by Joy Fielding. Copyright 2014 Booklist Reviews.

Gudenkauf, who launched her career with the Edgar Award-nominated, New York Times best-selling The Weight of Silence, goes hardcover with the story of Sarah Quinlan, whose husband lost his mother when he was a teenager. Returning home with him after his aunt Julia's accident, she realizes that there's something shady going on with this family. With a 250,000-copy first printing.

Gudenkauf, who launched her career a few years back with the Edgar Award-nominated, New York Times best-selling The Weight of Silence, which sold over 400,000 copies in print and digital, now breaks out into hardcover. Her heroine is Sarah Quinlan, whose husband lost his mother under mysterious circumstances when he was just a teenager. He's barely been home since, but he and Sarah return when Aunt Julia suffers a terrible accident, and Sarah begins to realize that there's something shady going on with this family. Originally scheduled for February; with a 250,000-copy first printing.

Edgar-finalist Gudenkauf (Little Mercies) exchanges her usual child-centered, topical stories for an old-fashioned melodrama in her hardcover debut. Physical therapist Jack Quinlan and his advice columnist wife, Sarah, are enjoying a comfortable life in Montana when they hear that Jack's beloved aunt Julia, who took him in at 15 after his parents were killed in a car accident, has suffered a potentially fatal fall. Jack returns to his Iowa hometown for the first time in 20 years with Sarah by his side, but Sarah swings rapidly from supportive to suspicious when she discovers that he has lied about his past. Pestering the locals for information and the original case files, she learns that the circumstances of the deaths of Jack's parents remain suspicious. The police classify Julia's subsequent death as a homicide and target Jack and his troubled sister when investigating the linked crimes. Readers should be prepared for implausible plotting, an unsympathetic protagonist, and a clichéd denouement. Hopefully, Gudenkauf will return to form next time. Agent: Marianne Merola, Brandt & Hochman Literary Agents. (Feb.)

Then she was goneJewell, Lisa

All the missing girlsMiranda, Megan

Bring me backParis, B. A.