The girl with the lower back tattoo / Amy Schumer. 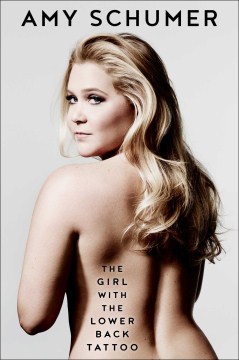 One of Schumer's recurring bits as a comic and performer, who writes and stars in her own TV series, Inside Amy Schumer, is that she's a consummate oversharer who leaves little to the imagination. It shouldn't be a surprise, then, that her book, besides being laugh-out-loud funny, is also pretty daringly personal. (Schumer's introductory note to readers is quickly followed with "An Open Letter to My Vagina.") It will come as a surprise that she's an introvert, that she had a storied career as a teenage shoplifter, that she's never, ever going to live in L.A., and that there are still 44 other things readers won't know about her, all handily gathered in the chapter,"Things You Don't Know About Me," in case you wanted to skip ahead—but don't.If, somehow, George Carlin were to come up with an updated list of, say, 15 words you can never say on television, they would probably all be in here, and there's lots of, well, sex stuff from the writer whose comedy special was called Mostly Sex Stuff, but many of the "I can't believe she wrote that" are provoked by heavy things, too. She's candid about her dad's multiple sclerosis, the abusive relationship she couldn't pry herself from in her early twenties, and the bummer that was the international press tour following the release of the successful movie she wrote and starred in, Trainwreck. The moment she learned that two women died in a shooting at a showing of the film is tied for the worst in her life, and precipitated her fervent interest in speaking up for stricter gun control.Schumer is obviously grateful for her success and its spoils, but she makes it clear how hard she's worked for it all, which is in itself refreshing. This is one woman's paean to comedy (standup remains her favorite part of what she does), hard work, and, boldly, herself.HIGH-DEMAND BACKSTORY: This book, and the multimillion-dollar advance Schumer received, have been buzzed about for ages. Readers are primed. Copyright 2016 Booklist Reviews.

Happily Ali after: and other fairly true talesWentworth, Alexandra