Here I am / Jonathan Safran Foer. 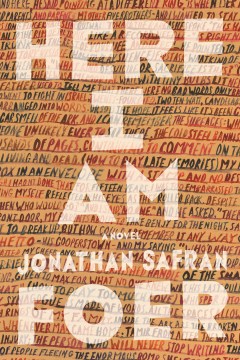 *Starred Review* Family and what it means to be Jewish, subjects of infinite complexity, are novelist Foer's preoccupation and inspiration. In his first novel in 11 years—a far longer, edgier, and more caustically funny tale than Everything Is Illuminated (2002) and Extremely Loud and Incredibly Close (2005)—he choreographs the disintegration of the once blissfully close marriage of architect Julia and TV writer Jacob, exploring how their changing relationship affects their three sons (so cannily portrayed), especially the eldest, Sam, who escapes whenever possible into a virtual alternative world, Other Life. Foer has enhanced his mastery of rapidly volleying dialogue and churning inner monologues and raised them to torrential proportions as the Blochs of Washington, D.C., relentlessly analyze and argue about every feeling, thought, occurrence, and action with Talmudic exactitude. By mining elements of his life to construct the many-chambered domestic tale, Foer achieves the ringing clarity of authenticity. But for all his focus on familial intricacy (including attachment to an aging dog), intellectual musings, rogue eroticism, and various neuroses, Foer is also grappling with the larger forces of anti-Semitism and war. The novel's provocative title is taken from Genesis. When God thunders, "Abraham!" Abraham declares, "Here I am." He is present and obedient; he will even sacrifice his son. This total commitment is anathema to Foer's argumentative, fiercely inquisitive American characters, recalcitrance amplified when Jacob's Israeli cousins, Tamir and his younger son, Barak, come to visit, catalyzing a running comparison between cushy American Jewish lives and the rigors of battle-ready Israelis. This contrast is further intensified when a major earthquake strikes the Jewish state, emboldening its enemies to attack. What are Jacob and Julia's duties to the Jewish homeland? To their family and to themselves? As Sam contemplates Abraham's predicament in preparation for his bar mitzvah, he thinks, "it is primarily about who we are wholly there for, and how that, more than anything else, defines our identity." Foer's voluminous (verging on overblown), polyphonic, and boldly comedic tale of one family's quandaries astutely and forthrightly confronts humankind's capacity for the ludicrous and the profound, cruelty and love. Copyright 2014 Booklist Reviews.

In Genesis, Abraham answered "Here I am" both when God demanded the sacrifice of Isaac and when Isaac asked why they had brought no animal to the altar, and here are Jacob, Julia, and their three sons, faced with awful, cross-purpose choices as they try to bridge the gap between what they have and what they want. Foer's first novel in 11 years; look for Foer at LJ's Day of Dialog.

In Foer's first novel in 11 years (after Extremely Loud and Incredibly Close), Julia and Jacob Bloch's marriage, once buoyed by the determination always to act with purpose, has been worn thin by a slow withholding and the demands of daily life. Jacob writes ruefully for television, steel-spined Julia is fed up with his timidity, and now son Sam has been accused by the rabbi of writing a list of offensive epithets. As Jacob insists that his son couldn't have done it and Julia retorts that Sam must apologize, it's not just Sam's upcoming bar mitzvah that is threatened. The Blochs' marriage is on a collision course, powerfully framed by reference to the biblical story of Abraham and Isaac, which makes this richly conceived work more than another tale of marital woe. As Sam himself explains, Abraham answered "Here I am" when God demanded the sacrifice of Isaac and when Isaac asked why they had brought no animal to the altar, with Abraham showing a willingness to be fully present for both in a way that Sam's own parents had failed to show him when he was accused of hate speech. Inattention is its own bad move, and as we see throughout, as when Jacob's Israeli cousin scrambles as the Middle East explodes, "not to have a choice is also a choice." VERDICT Rigorous questions within an accessible story; highly recommended. [See Prepub Alert, 3/7/16.]—Barbara Hoffert, Library Journal

Fleishman is in troubleBrodesser-Akner, Taffy

This is where I leave youTropper, Jonathan