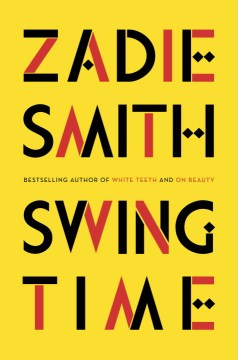 *Starred Review* The unnamed narrator in Smith's agile and discerning bildungsroman is entranced and provoked by a Fred Astaire dance number in the movie Swing Time. "Swing time" is also a feat her narrator performs as she pivots from the disastrous present back to the past as she tries to understand her plummet by telling her story and that of her childhood best friend, Tracey. Though passionate and knowledgeable about dance, especially pioneering African American tap stars Jeni LeGon and the Nicholas Brothers, the narrator doesn't have the body for it, while Tracey has the requisite build and drive. Both "brown girls" lived in a London housing project in the early 1980s—the narrator with her ambitiously political Jamaican mother and her laid-back white father, Tracey with her white mother, while longing for her black father whose appearances were infrequent and fraught. Close as they are, the girls are destined for diverging paths as Tracey stakes her future on dance, and the narrator muddles through a goth phase and college, then lucks into a job as a personal assistant to an international pop star, the fiercely willful, strikingly pale Aimee, who hijacks her life. Smith's narrator's anxiety and recalcitrance are legion, but through her omnivorous senses, wary skepticism, and ballistic wit we experience vitally detailed settings and dramatic and ludicrous situations that put to the test assumptions about self and community, creativity and activism. The Ginger Rogers to various Fred Astaires—from her mother to Tracey to Aimee—she recounts her disconcerting misadventures in London, New York, and, most intensely, a small, poor, tyrannized West African country in which Aimee decides to build a girls' school, while incorporating African dance into her act. As the narrator struggles to find her way through a maze of morally dubious desires and demands, Smith postulates equations of power in relationships complicated by race, class, gender, celebrity, culture, politics, and religion.With homage to dance as a unifying force, arresting observations ("elegance attracted me . . . . I liked the way it hid pain"), exceptionally diverse and magnetizing characters, and lashing satire, Swing Time is an acidly funny, fluently global, and head-spinning novel about the quest for meaning, exaltation, and love. Excitement always surrounds much-lauded Smith's books (NW, 2012), and this tale of friendship lost and found is going to be big. Copyright 2016 Booklist Reviews.

This is a story about two women whose friendship ultimately collapses, but because Smith is such a touchstone author, it's about so much more. In North West London, two dark-skinned girls want to do nothing but dance, yet only one has talent. The other, however, has strong ideas on rhythm, black music, how black bodies are treated, and how a cohesive sense of tribe balances with individual freedom. The narrative swerves to West Africa, and the friends part in their twenties, never reconciled yet indelibly shaped by having known each other.

The remarkable Smith (NW) again does what she does best, packing a personal story (here, identifiably, of two competitive female friends) into a larger understanding of how we humans form tribes (a word used throughout). In London, two mixed-race girls meet in dance class, and while the narrator passionately loves movement, carefully studying steps in old-time movies, it's glamorous, dominant, socially advanced Tracey who wins medals and advances in her training. Even as their relationship veers between close and cold, our heroine struggles with a feminist, socially conscious Jamaica-born mother who spouts history lessons about social oppression and is disappointed when her daughter chooses not to stretch herself, ending up at a second-rate university and finally as a personal assistant to international pop sensation Aimee. Aimee is currently pushing a vainglorious project to bring a school to an African village, leaving plenty of room for Smith's ever nuanced play between and within racial and class structures. The narrative moves deftly and absorbingly between its increasingly tense coming-of-age story and the adult life of the sympathetic if naïve and sometimes troubling narrator, whose betrayal of Aimee echoes Tracey's betrayal of her. VERDICT A rich and sensitive drama highly recommended for all readers. [See Prepub Alert, 5/2/16.]—Barbara Hoffert, Library Journal. Copyright 2016 Library Journal.