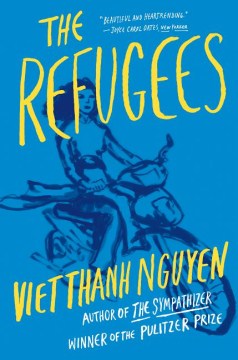 Nguyen's The Sympathizer won six prizes (including the Pulitzer) and was a finalist for four, which must be some sort of record. In this second work of fiction, a story collection whose earliest entry dates from 1997, the characters include a young Vietnamese refugee adjusting to living with two gay men in San Francisco and a woman who's come to Ho Chi Minh City from America, leaving her younger half-sister dismayed at what she herself can never have or do.. Copyright 2016 Library Journal.

Although publishing ten months after Nguyen won the Pulitzer Prize for The Sympathizer, this collection precedes his novel by decades (the earliest entry dates from 1997). In a pre-Pulitzer interview [ow.ly/qXus3057v1g], Nguyen credits a 15-year experience "characterized by drudgery and despair, laced with a few bright moments when the stories were published or won awards" as the labor necessary to produce his stupendous Sympathizer. These eight stories encompass migration, loss, and disconnect as characters navigate and stumble through memories, experiences, and perceived realities. Two siblings reconnect in "Black-Eyed Women" decades after their deadly boat escape from Vietnam. The children of refugees serve as both witnesses and enablers to their dislocated parents in "War Years," "Someone Else Besides You," and "Fatherland." Unlikely connections haunt two of the most resonating stories: an aging man with dementia begins to call his wife by someone else's name in "I'd Love You To Want Me," while an organ recipient meets the donor's family in "The Transplant." VERDICT For Nguyen groupies desperate for future titles, Refugees is a highly gratifying interlude. For short fiction fans of other extraordinary, between-culture collections such as Daniyal Mueenuddin's In Other Rooms, Other Wonders and Jhumpa Lahiri's Unaccustomed Earth, Nguyen won't disappoint. Either way, highly recommended. [See Prepub Alert, 8/8/16.]—Terry Hong, Smithsonian BookDragon, Washington, DC. Copyright 2016 Library Journal.

Each searing tale in Nguyen's follow-up to the Pulitzer-winning is a pressure cooker of unease, simmering with unresolved issues of memory and identity for the Vietnamese whose lives were disrupted by the "American War." In "Black-Eyed Woman," a writer is visited by the ghost of her teenage brother, who was murdered trying to save her from Thai pirates while fleeing the Vietcong. "War Years" is about a family of Vietnamese grocers in San Jose, Calif., challenged by another refugee to donate money to rebels still fighting the Communists back home. When an armed intruder invades the family's home, the piercing irony is that their youngest son thinks it's safe to open the door because the man is white. In "The Transplant," Arthur Arellano is the recipient of a new liver from Men Vu, a Vietnamese man killed in a hit-and-run, whose son befriends him, then makes him complicit in his shady business selling fake designer goods. The most disturbing story is "Fatherland," in which a man names his second set of children in Vietnam after his first set, who have fled to America with his first wife. When the American Phuong (now Vivien) visits her sister Phuong in Vietnam, Vivien reveals she is not the doctor her mother boasted she was. It is clear that author Nguyen believes the Vietnamese Phuong, more self-aware and resolute, is better off than her American doppelganger. Nguyen is not here to sympathize—"always resent, never relent," as the anti-Communist exiles proclaimed in —but to challenge the experience of white America as the invisible norm.